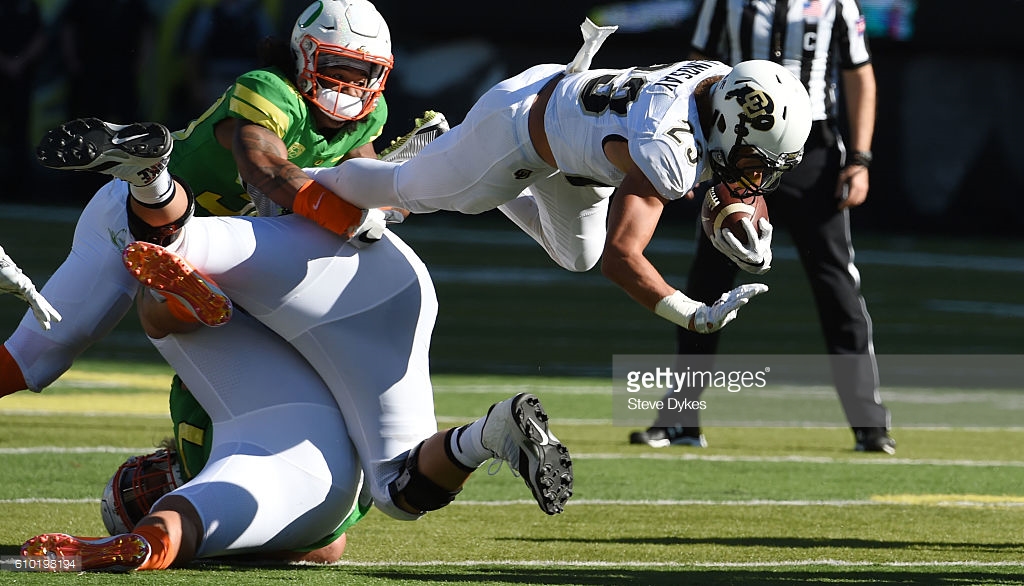 -Stout, powerful frame that can handle heavy workloads
-Bowling ball running style and consistently falls forward through contact
-Quick, efficient footwork that gets him up to full speed quickly
-Underrated home run hitter with deceptive long speed
-Sound technique as a pass protector and is willing to step into blitzers with power

-Limited route runner out of backfield with erratic hands
-Struggles with vision at times running out of shotgun at Colorado
-Small for position with limited elusiveness
-Tried to hit home run far too often, leading to missing simple positive runs to keep chains moving

-Played in all 51 of CU’s games in his career (30 career starts)
-Became Colorado’s all-time leader in all-purpose yards with 5,760 and yards from scrimmage 4,683
-Finished as the Buffs’ second all-time leading rusher with 3,707 yards and was the first player in CU history to record back-to-back 1,000-yard seasons (and just the second to have two period)
-Only running back in CU history to have two 100-yard receiving games (both during his junior year)
-Recorded 11 100-yard rushing games, with two over 200 in his career
-Finished fourth on the scoring chart (234 points, second to only Eric Bieniemy by non-kickers), and also earned 234 first downs (195 rushing, 39 receiving), the most in school history by a non-quarterback
-Just the third player at Colorado to score 10 or more touchdowns in back-to-back seasons (16 as a junior, 14 as a senior, joining Charlie Davis, 1971-72 and Chris Brown, 2001-02); scored at least once in 21 of his final 27 games
-Set 24 records and tied two others in his CU career.

Nicknamed the ‘Tasmanian Devil’ while at Colorado as a member of the Buffaloes’ football program, running back Phillip Lindsay personified what it means to be a bowling ball running back.

Standing just 5-foot-8, Lindsay is small in stature, but one of the hardest runners in college football over the last four seasons at CU. He’s a whirlwind of movement out of the running back position, with his legs and arms constantly churning and flailing, as well as his afro protruding out of the back of his helmet, bouncing around as he runs.

While at CU that last four seasons, Lindsay set a number of school records, becoming of the best running backs in the program’s long college history for the position. However, he enters the NFL draft with a ton of miles on his body, which could be a hindrance to him at the next level.

Fortunately for the Buffs, Lindsay was a consistent workhorse, helping Colorado rebound to prominence in the Pac-12 the last few seasons, largely due to their power running game centered on Lindsay.

Love this guy’s heart. Constantly fights for every blade of grass in his runs. Ends up scoring here. Bowling ball running back that loves contact and is able to bounce off of it to maintain balance. pic.twitter.com/K4Cuqi9qkb

Lindsay likes to seek out contact, but he has limited elusiveness. He’ll make some defenders miss in space, but he’d rather lower his shoulder. Against Arizona State, Lindsay had a nose for the end zone, spinning off of a tackler, somehow maintaining his balance and then fighting for the goal line.

Runs like this were typical with Lindsay for the Buffaloes. He low, compact frame allows him to absorb contact well, and helps him stay balanced through the end of runs.

Lindsay is really good at getting his pads square to the line. Shows some elusiveness here and finishes the run strong through contact. Really like his footwork once the ball is in his hands. pic.twitter.com/VxUCHqAiLl

One thing I really like about Lindsay as a runner is that he likes to get his pads square to the line of scrimmage quickly once the ball gets in his hands, allowing him to run downhill with force.

Here against Arizona, Lindsay flashes great footwork in the backfield, and then shows off some elusiveness, making defenders miss in space. He doesn’t look as smooth on tape as some other backs in this draft class, but I love the footwork from Lindsay, and the ability to get his pads square early in the play.

Arm tackles are nothing to this guy. His lower half is super strong, and really explosive. He doesn’t look like it in pads, and due to his running style, but he’s a legit home run hitter as a runner. pic.twitter.com/bx67CozR3p

An area of Lindsay’s game that seems to get overlooked at times is his ability to hit the home run for the Buffaloes. Here against Arizona State in 2016, Lindsay bursts through a big gap in the line. Once he reaches the second level, you see the jets from Lindsay, who runs through two sets of arm tackles from the corner and safety before then running away for the 70+ yard touchdown against the Sun Devils.

Quite often at Colorado, Lindsay was an explosive-play running back, but there were times in his four years there that he tried too often to hit the home run on runs, instead of taking what defenses gave him. That can be cleaned up at the next level, largely because I believe Lindsay felt at times he had to make something happen with his legs offensively to keep the Buffs in games.

Aside from his abilities as a runner, Lindsay was a productive pass catcher out of the backfield, but that doesn’t mean he was a good route runner. A lot of Lindsay’s catches were on check-downs out of the backfield on simple flairs and screens, allowing him to make plays with his legs after the catch. He could certainly carry that over to the NFL, but if he wants to carve out a role as a third down back early in his career, he will undoubtedly have to develop a route tree for the position.

Along with his improvement in routes, he has to work on his hands as well. On throws away from his body, he had a poor catch rate, largely because he relied on body catches out of the backfield.

I like Lindsay the player on and off the field. I think he can be a legitimate change-of-pace running back who can excel in short-yardage situations while also bringing some juice as a third down back.