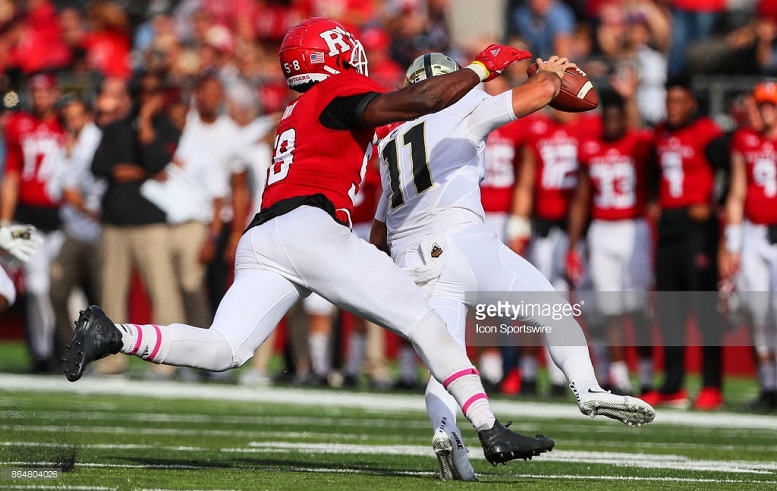 – Feisty hands, can fight his way into the pocket
– Packs a powerful punch
– Athletic, fluid in space
– Good pursuit speed and closes in quickly
– Shows use of an inside swim move
– High motor
– Can hang with running backs in man coverage

– Needs to add strength to avoid getting sealed at the edge
– Gets bodied by bigger, stronger linemen, even getting overpowered by tight ends at times
– Could add more bend to his speed rush, gets run up the arc too often
– Injury concerns, two surgeries on right shoulder
– Sometimes shows stiffness in pass rush, needs to smoothen counter move

There is a Kemoko Turay in every draft class – maybe not literally but every year there is an edge prospect that just catches the world’s attention for his boom or bust potential. This year, Turay is that guy as the Rutgers outside linebacker oozes potential on the football field with his athleticism and raw ability. Though he finished with just three sacks last season, this is a player who could see double digit sack numbers in the NFL if he finds his footing.

Turay is very quick, in fact he’s quick in everything that he does. His hand work, his first move and his attack. The Rutgers’ pass rusher is explosive off the snap and his hand work is already NFL quality. Watch how Turay quickly swipes and swims by the Washington right tackle and falls just short of a sack. Many pundits will use the term coachable traits when describing a young pass rusher’s arsenal but when it comes to Turay, his arsenal of moves should not be downplayed as coachable raw traits – they’re beyond that, they are downright impressive.

Power is a trait that you cannot coach no matter how hard you try. Turay’s powerful punch as a pass rush move is worth taking note. Watch above as he completely open’s up Michigan tackle Juwann Bushell-Beatty with a powerful punch, clearing an open inside lane to the quarterback. While a sack is not achieved, any punch strong enough to completely reset a 315-pound lineman is one to remember. Turay’s ability to use his hands while rushing the pass continue to shine on tape as one of his biggest strengths.

A pass rusher can have more firepower than the military in his arsenal but without a plan, this firepower is often just wasted effort. Turay shows a plan above and it is a pretty sight to his plan be put to action. Watch how the Rutgers’ pass rusher uses his speed to turn in a natural bull rush before transitioning to his swim move and going right under the outside shoulder of the Illinois right tackle. The plan is perfectly executed and Turay comes away with a sack, perhaps his most impressive sack of his college career. It is the tools and plays like the one above that make the pass rusher such a high ceiling prospect in this year’s draft.

Turay moves like a lion pouncing on a wild gazelle on the football field as the pass rusher acquires a target and closes in quickly on his prey. That’s exactly what happens above as he makes a fast break for the Illinois ball carrier while the left tackle, the player responsible for him is left frozen. Turay’s hustle and athleticism make him not only a player who can close in quickly on ball carriers but also a legitimate sideline to sideline player.

Of course, Turay is not the most complete player. His work at the point of attack still needs a considerable amount of work. Too often the Rutgers’ pass rusher is overpowered and driven backwards by opposing linemen and sometimes even tight ends. The matchup against Michigan was especially eye opening in Turay’s resume as proof that the pass rusher could definetly add more strength to his frame in order to not be a liability against the run. Watch above as he is completely bodied and driven to the ground, one of the handful of times he was completely overpowered by the Michigan offensive line. For Turay to reach his full ceiling, the pass rusher will have to be a more consistent winner at the point of attack.

Let’s not forget another glaring aspect of Turay’s game that is staring scouts directly in the face – his sack production. While he flashes all the tools and potential to be a dominant pass rusher, the Rutgers’ defender will have to be a better finisher as three sacks just will not cut it. Luckily for him, three sacks seems like the floor rather than his ceiling.

One of the most exciting pass rushers in this year’s draft, Turay’s athleticism and advanced speed and hand work make him an intriguing player. With a ceiling that knows no boundaries, the Rutgers’ star could be one of the fastest rising pass rushers in this year’s class. Any team, including the Pittsburgh Steelers would welcome his talents and it could be a possibility that the black and gold welcome Turay’s talents should he still be available.

Games Watched: vs Ohio State, vs Michigan, vs Washington, vs Illinois