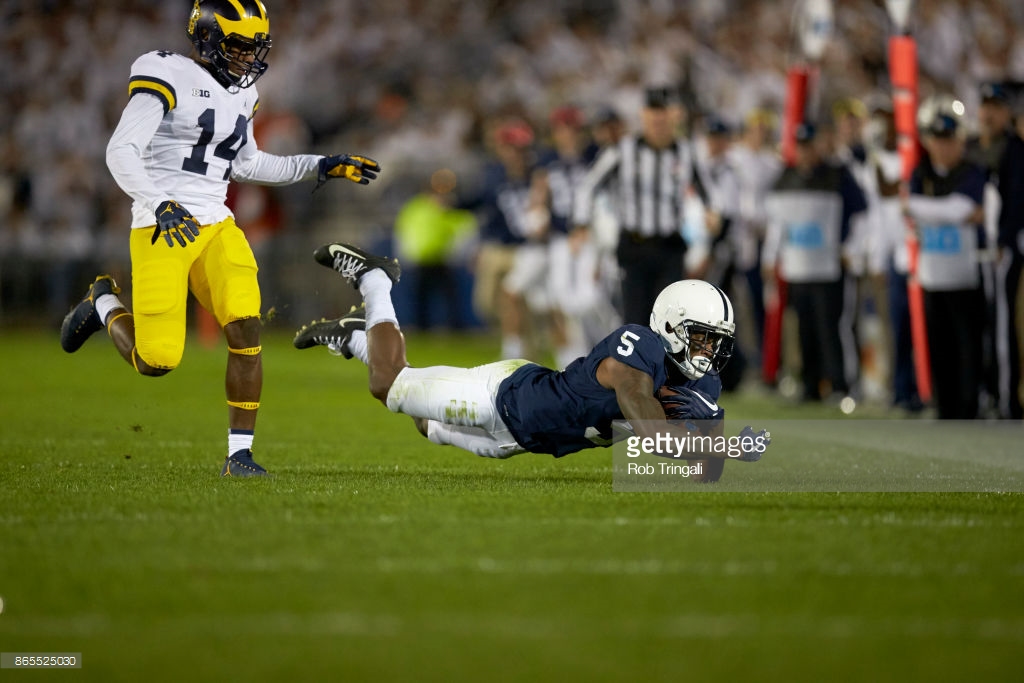 -Capped his career as Penn State’s all-time leader in receptions (214), passing Deon Butler’s mark of 179
-Caught at least one pass in 34 straight games to begin his career
-Had at least one catch in 51-of-53 career games
-Ended his career ranked No. 2 on Penn State’s all-time receiving yardage list (2,842), trailing only Bobby Engram (3,026) for the top spot
-Became the ninth player in Penn State history to eclipse the 2,000-yard receiving mark
-Had 21 career games with five-plus receptions
-Finished his career tied for No. 3 all-time at Penn State with nine 100-yard receiving games

One of the most productive, big-play wide receivers in college football over the last two seasons, DaeSean Hamilton seems to be getting slept on in the pre-draft process leading up to April’s 2018 NFL draft.

Not the biggest, longest or fastest receiver in the draft, Hamilton quietly gets by with tremendous route running and the ability to make plays down the field through contact in an explosive Penn State offensive.

Saquon Barkley certainly steals the show at Penn State offensively, but Hamilton is a solid receiving prospect who was very productive over four seasons.

Despite not being an explosive receiver, Hamilton uses his ability to run crisp routes out of the slot, becoming one of Trace McSorley’s favorite receivers over the last two seasons.

Whoops the Michigan CB right at the LOS on this slant route. Hand fake is great, and his footwork is outstanding. He’s not an explosive guy, but he gets into the route quickly once he wins at the line. pic.twitter.com/1SMsUV8L9S

Check out the shake at the line of scrimmage to beat the Michigan receiver off the line, leading to the big chunk play against the Wolverines.

Hamilton’s footwork is outstanding for a slot receiver, and he has the head wiggle down pat, allowing him to shake free over coverage. Once he gets the ball in his hands, he explodes up the field.

While Hamilton will flash as a route runner and play-maker like this often, focus drops plagued his career at Penn State.

This should have won the game for Penn State at Pitt in 2016. Straight drop by DaeSean on the out-and-up late in the game. Focus drops were a problem for Hamilton throughout his career. pic.twitter.com/tCCZiMy0HT

Focus drop again. Does a great job of beating the corner off the line with a power step to the boundary before slipping back inside. Ball hits him right in the number. Looking upfield for the hit instead of securing the football. pic.twitter.com/FQFdWVP9ss

The first clip is from a game early in the 2016 season at Pittsburgh. Hamilton ran an out-and-up on the play, slipping behind the Pitt defender for what should have been a touchdown, which should have given Penn State a huge comeback win on the road. Instead, Hamilton loses focus just slightly, allowing the ball to bounce off his hands. Eventually, Pitt held on to win a game that likely kept the Nittany Lions out of the College Football Playoff that season.

In the second clip, Hamilton beats the Akron cornerback off the line cleanly, much like he beat the Michigan cornerback in the very first clip of this article.

However, Hamilton loses focus as the ball is in the air, worrying about a possible hit coming from the safety, instead of securing the football first. Despite putting up monster numbers the last two seasons at Penn State, those numbers could have been even bigger if Hamilton cleaned up the drops and inconsistencies with his hands.

As a slot receiver, Hamilton had a full route tree at Penn State, but he excelled at the slot fade, doing most of his damage on those routes under James Franklin and Joe Moorhead.

Slot fade FTW. Love the way Hamilton creates just enough separation and goes up to get this football. pic.twitter.com/KvYQrfinod

Hamilton loves slot fades, especially in man. I rarely saw defense stop him on this route, especially in the last two seasons. pic.twitter.com/GZil2rnDk1

Both clips come in the red zone, and both times Hamilton has impressive body control to not only stay in bounds, but twist around to make a play on the ball for a touchdown.

Hamilton is very good at getting off the line quickly out of slot to get into these routes by simply getting up the field quickly. Where he struggles out of the slot is on slow-developing routes, where corners can get their hands on him, slowing Hamilton down.

Aside from his ability to eat up chunks of yardage on deep routes, Hamilton can be a good possession receiver. More often than not, Penn State loved to send him on quick out-breaking routes, giving McSorley a security blanket to check down to on the boundary.  He excelled at the Senior Bowl with his route running, causing the draft community to start to start to buzz about him.

He’s a willing blocker that loves to stalk his defender down the field, trying to stay engaged as a blocker for the duration of plays in hopes of busting a teammate for a big play.

Away from the game, all reports state that Hamilton is a great teammate and a great community guy, which should be a huge positive for potential GM’s looking for receiver help.

Overall, if Hamilton can clean up the consistency issues with his hands and continue to perfect his craft as a route runner, the Penn State product should carve out a long, productive career as a possession slot receiver with some serious game-breaking ability on deep balls.