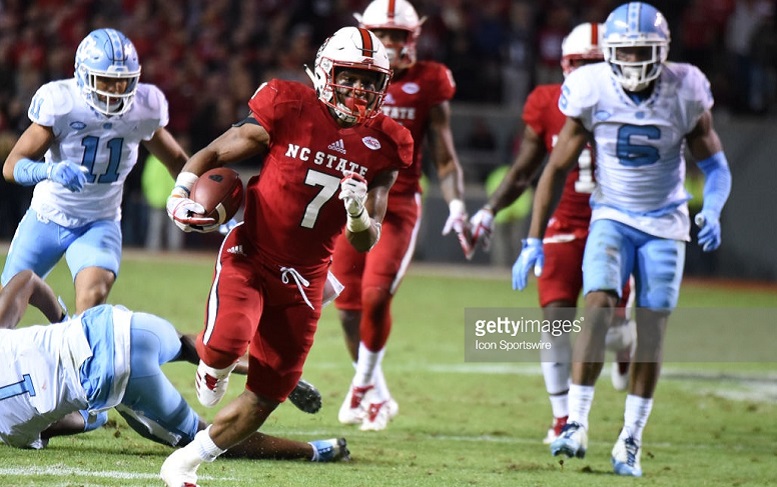 – Experience as running back and receiver
– Electric return man (both kickoff and punt return)
– Very slippery, elusive, can make defenders miss easily with excellent quickness and agility
– Has breakaway speed
– Speed to beat the defense to the sideline
– Great burst, can build up speed in an instant
– Soft hands as a receiver

Hines is such a smooth runner when given room to operate, the running back makes big plays look so easy with his elite athleticism. What is truly incredible to note is how he flows through traffic without losing speed, from running laterally to turning upfield, the running back shows no evidence of slowing down while changing direction. Due to his speed and quickness, every play has the potential to go the distance as Hines is easily one of the biggest home run threats in this year’s running back class.

Former North Carolina and current Arizona Cardinal running back T.J. Logan is a very similar player to Hines as both have the speed to beat defenses to the sideline before turning it upfield. Watch above how the running back is able to beat the North Carolina safety to the sideline and is off to the races. Due to his athleticism, Hines shows a good feel for running off tackle and will likely be best suited for running outside zone schemes at the next level.

This above play is a two for one for understanding Hines’ profile. Let’s start with the reception. With 89 receptions over his college career, the N.C. State running back is a reliable receiving threat out of the backfield, so much that N.C. State even experimented lining him up as a slot receiver early in his career. That dynamic brings versatility which brings mismatch potential. It is hard enough to square up Hines in the backfield, but now imagine the trouble of having to cover him out wide. This alone will draw many teams to the running back as he can be an intriguing weapon as a receiver.

The second part of the play is the elusiveness, the two spin moves that turns a negative play into a positive one. The NFL is all about creating yardage, whether it is yards after contact or with elusiveness and Hines certainly can create yardage for himself.

Often the difference between making a roster and being waived comes down to special teams ability. Hines has special teams value oozing through his veins as he is an explosive and electric return man. It is here where you can easily tell that the running back is also a tracks tar as his breakaway speed and burst make him an uncatchable return man. Just watch how fast the N.C. State running back is able to sperate from the Clemson kick coverage. Keep in mind that the above kick return came in Hines’ freshman year as his speed and big play potential made him too much of a threat to redshirt.

The biggest flaw with Hines has a lot to do with his biggest strength. His track star speed and burst makes life easy when running outside the tackles but he could be prone to some mental errors when running between the tackles. The running back shows an eagerness to want to bounce outside should nothing open in the middle and his vision is still a work in progress. Watch above as the Louisville edge defender has outside leverage and Hines falls right into his trap, being swallowed for no gain.

Expecting a 197-pound running back to be a workhorse back would be unfair, instead like many running backs before him, Hines could find his niche as a change of pace back or third down back. You will have a tough time finding a faster running back than Hines, as with his big play potential, receiving ability and electrifying special teams skill, the N.C. State running back will add a home run dynamic to the team that selects him.

Games Watched: vs North Carolina, vs Louisville, vs Pittsburgh