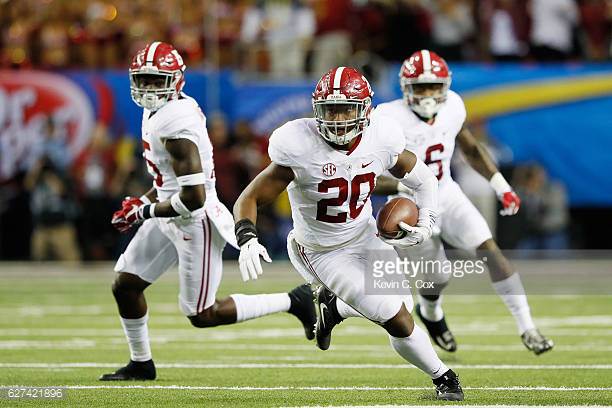 –Good football IQ aka play recognition/feel for the game
–Great gap responsibility
–Excellent field vision
–Loose hips with a natural drop back into coverage
–Avoids blockers well.
–Open field tackler.
–Was quick enough in 2016 to line up guarding the slot.

–Fractured right kneecap in November 2017, tore right ACL in 2016.
–Got slower after ACL tear in 2016, can he get back to form in 2018?
–Has problems disengaging from blockers.
–Vertically challenged aka short.
–Leaves his feet too often.

The quarterback is lined up in the shotgun formation with a back trailing 3 yards behind him. #20 reads the Seminole blockers at the snap of the ball that it is a run play going his direction. Hamilton steps up to attack the opening and forces the runner to slip. This play demonstrates the backer’s vision and anticipation of what the offense was trying to do.

Faced with a second and 7, Hamilton lines up on the weak side behind his defensive end, yet overtop the wingback. At the snap, the backer recognizes the wingback jetting into the flats and follows to make a nice open field tackle near the sidelines. I like the way that play shows off his ability to recognize routes and wrap up tackle.

Lined up as an outside backer, #20 reads the pulling guard at the snap of the pigskin. The guard tries to cut block Hamilton out of the play; however the backer maintains his balance, stays home, and launches himself into the Trojan quarterback. The defender recognized the play design, kept his balance, and made the tackle with ease.

Against a run heavy formation, Hamilton watches the defensive tackle get double teamed at the snap. The backer gets too nosey as he doesn’t see the right guard scrape off to pick him up and drive him back. #20 with his height issues will need to make sure he isn’t solely focusing on the ball carrier; otherwise he will lose track of even more would-be blockers bearing down on him. This was a game early in his career, so he has improved on this, but his height will remain a factor.

Shaun Dion Hamilton has great football instincts and good athleticism before his right leg injuries. The NFL Combine will be the time for the Steelers and the other 31 teams to check him out. His height issues may still impede his effectiveness at the NFL level. As a flier in the later rounds, I would like Pittsburgh to consider taking a chance on him if he proves healthy and ready to contribute.