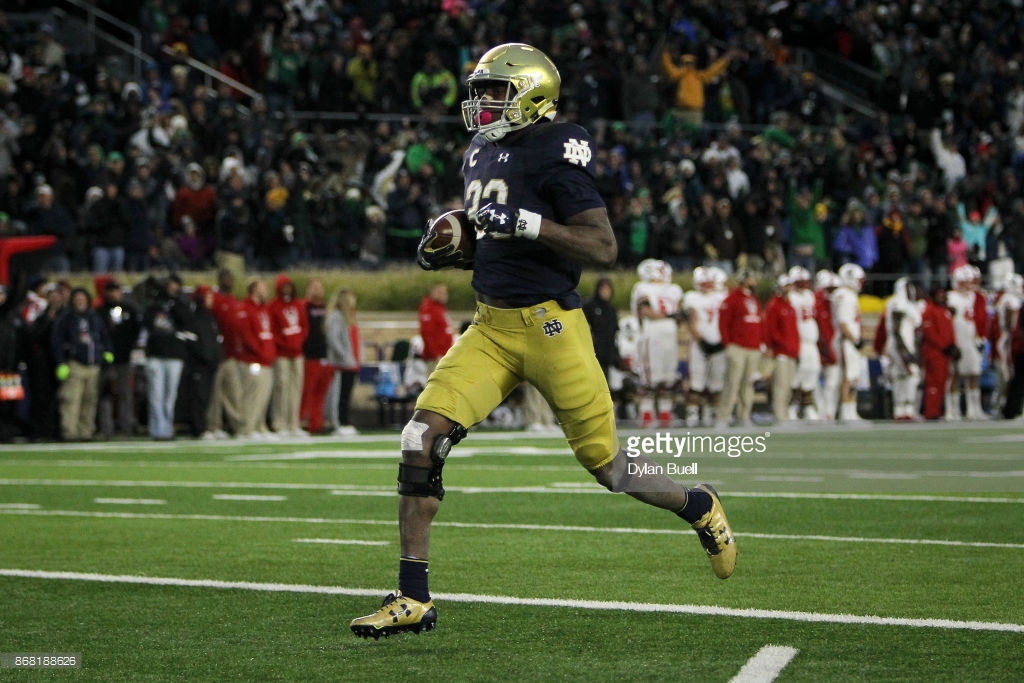 -Strong, powerful runner with great pad level for size
-Looks to dish out punishment at the end of runs
-Consistently falls forward
-Tremendous burst through the hole to daylight
-Homerun hitter with big strides to chew up yards in a hurry
-Willing pass blocker with good technique
-Underrated wiggle for a big back

In a deep, talented running backs class for the 2018 NFL Draft, Notre Dame’s Josh Adams seems to be an overlooked name at this point in the process.

A big back at 6’2”, 225 pounds, Adams loves to dish out punishment at the end of his runs. Despite standing 6-feet-2, Adams runs with great pad level and has a thick, powerful lower half that allows him to churn through contact.

I never got a chance to really watch Adams play live these last three years, but I was always able to check up on his stats as a distant Notre Dame fan. But once I popped on the tape, it was quite clear to me just how good Adams was.

For his frame, Adams is very physical as a runner, and it’s all due to his lower half. He is constantly keeping his feet moving at the point of contact, which allows him to finish off runs with strength.

I was concerned coming into the tape with how Adams would play in short-yardage situations, but the big Notre Dame back quickly put those concerns to ease.

That’s against Virginia Tech’s Tremaine Edmunds – a likely top 15 pick in April – from the 2016 season. Edmunds and another Virginia Tech defender meet Adams in the hole rather quickly, but keep an eye on Adams’ legs. Look at the churning towards the end to finish the run, securing the first down.

He’s not a back that will dance to try and make people miss in any situation; he’d rather run right through your face. I love that.

That doesn’t mean he doesn’t have any wiggle though.

My goodness. Love the jump-cut to get outside, but then he looks to inflict punishment on the hapless USC defender. pic.twitter.com/1Jaao6Ajis

That jump cut to the outside without breaking stride is a thing of beauty. Adams has some underrated vision, and he’s very elusive for his size, but again, at the end of the run he’s looking to bury a defensive back instead of running out of bounds.

While that’s music to my ears as a fan, as an evaluator, that’s a concern for a running back of his size and his frame, which has led to injury concerns at Notre Dame. While he didn’t miss many games due to injuries, he was constantly dealing with nagging injuries that forced him to miss a few series during games.

I can work with that though if I’m a GM or head coach looking to add to my running backs room.

One thing that really blew me away with Adams’ tape was his ability to hit the hole with speed, leading to his home run abilities as a runner.

Last one for tonight. Adams’ burst through the hole to daylight is absurd. I questioned his home run speed, but I’m dumbfounded by this. pic.twitter.com/Vg2uxQgNfF

I had to rewind three times to make sure the tape wasn’t skipping as he hit the hole. He simply plants his foot in the turf, pushes off and gets up the field in a hurry, running away from any defender that had a chance to flag him down.

What helps Adams be a home run hitting running back is his long strides, allowing him to chew up a ton of yardage in a hurry.

There’s a lot to love about Adams as a runner, but as a pass catcher, there’s not much to work with. Yes, Notre Dame moved him around the offense at times, but he’s got some seriously inconsistent hands and has a limited route tree out of the backfield.

There were times over the two seasons of game tape that I watched where Adams was wide open flaring out of the backfield, but you just see how reluctant DeShone Kizer and Brandon Wimbush were to look Adams’ way.

That drop against Virginia Tech was late in the game on third and short. Adams is wide open and has the first down easily and the ball just bounces off of him. That’s not encouraging.

But like I said, he can be a valuable addition to a backfield, even if he isn’t a third-down caliber running back. Adams is a willing blocker and has a long wingspan to help him get his hands on pass rushers in the pocket. His awareness in that area is pretty solid too, so being able to protect the quarterback as a running back will get you on the field.

If I’m a team in need of a No. 2 running back in the 2018 NFL draft, I’d be more than happy to scoop up Adams in the third or fourth round, largely because the value and production you’ll get from Adams will be a major bargain in that area of the draft.

While he’s not in the same breathe as Nick Chubb from Georgia or Rashaad Penny from San Diego State, I’d consider Adams before I would consider Arizona State’s Kalen Ballage.