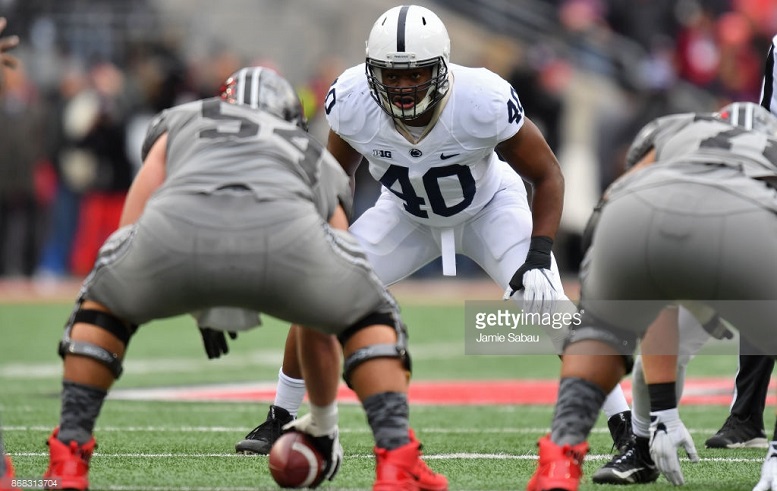 – Slow twitch athlete, very stiff, not overly athletic
– Lacks quickness in his initial step towards play direction
– Can get overpowered on blocks and shoved out of play direction
– Doesn’t have the athleticism you desire in a three down linebacker
– Instincts are inconsistent

Jason Cabinda finished with the ninth most tackles in Penn State history and was a big body over the middle. While Cabinda may be a name that many in the Pennsylvania area are aware of, he may not be familiar name to some. A big bodied linebacker with a lot of hustle, the Penn State prospect fills out an adequate linebacking draft class.

Let’s start right away with the hustle. Cabinda is a high motor player who simply keeps going and will attack the football. Watch above as he (#40) sniffs out the screen pass in a flash and attempts to bring down the Iowa ball carrier. While his first attempt is unsuccessful, Cabinda shows the grit and determination that every coach loves to see and gets back up to finish the tackle.

Very much an old school linebacker, Cabinda is tough and punishing. Watch above as he gets over the top to stop Iowa’s 4th and short quarterback sneak. Not quite Troy Polamalu like but a big enough play to get the job done. Cabinda’s toughness and old school crushing tackles surely will make your dad say that the Penn State product plays the game the way it’s supposed to be played.

From old school to new school, Cabinda does show some ability to drop into coverage. While he may never be the sideline to sideline linebacker capable of covering running backs man to man, the Penn State linebacker does show efficiency in zone coverage. Watch above how Cabinda drops back, bumps the receiving target and then is able to make a play on the ball, falling just short of an interception. He has also shown some ability to cover tight ends on short routes as he sticks to the hip of his targets. When it comes to coverage, Cabinda may never survive a sink or swim scenario but given some support the linebacker surely can get the job done.

Instincts are one area where the linebacker falls short, as Cabinda is not the most instinctive linebacker you will find. He is not going to be the linebacker who predicts a play prior to it happening, that is just not who he is. Watch above as Cabinda is fooled by Ohio State’s option handoff and floods inside while quarterback J.T. Barrett is able to pick up a few yards on the carry.

The above play is nothing short of ugly. Cabinda is shoved completely out of the play by Nebraska tight end Jack Stoll. According to the Nebraska website, Stoll has 10 pounds on Cabinda but is able to completely manhandle him aside. What makes this play even more disturbing is that the linebacker has outside leverage on a handoff that is heading to the sideline. This is a play that he just has to make and a play he will be expected to make countless times at the next level.

Overall, it is important to understand who Cabinda is. He is not a linebacker who will carry your unit, but he could potentially develop to be a valuable second piece or backup option. He is also a player whose motor and hustle will make him a special teams contributor immediately. While this may restrict his ceiling, there is still opportunity for Cabinda to craft a role at the next level.

Games Watched: vs Ohio State, vs Nebraska, vs Indiana