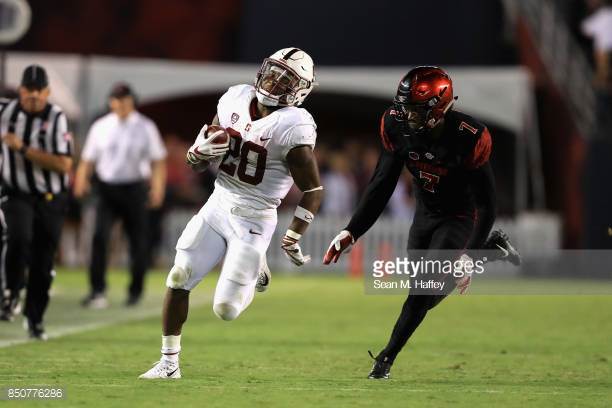 – Good frame, looks the part
– High IQ, quick processor able to anticipate and willing to take chances
– Finishes plays and though didn’t put up gaudy numbers, impact was timely (end of game INTs)
– Effort player who supports the run, willing tackler and throws his weight around
– Versatile, experience at corner and safety, press and off coverage, and used as a blitzer
– Selfless player who transitioned to corner for good of the team
– Competitor with short-term memory
– Quality starting experience, decent production

– Not going to play corner at NFL level, needs to make move back to safety
– Too tall in his pedal, hips too stiff, and struggles to flip and run on vertical routes
– Aggressive to a fault in man coverage, poor eye discipline and can get out of phase (has safety eyes)
– Average speed and struggles to carry deep routes
– Must improve on coming to balance and keeping head up as a tackler

I’ll get the comp out of the way early. See a lot of Sean Davis in Kelly. Partly in use, partly in ability. Davis will test much better but they’re guys who quickly found out they’re going to have to play safety to hack it in the NFL. That’s where Kelly spent most of his career before moving to corner after the depth chart got thin. Respect him for approaching coaches about making the move (that’s what he told me at the Senior Bowl) but he’s going to play safety in the NFL.

He has the mentality and the eyes of a safety. Aggressive. Play the ball, not the man. Only three interceptions his senior year but they came in huge moments. SDSU walked away with an upset win over Stanford. Kelly sealed it with the INT.

Same game. Admire the chase and effort to prevent the TD. Across the field to bring down Bryce Love. Not an easy play.

But it wasn’t always perfect at corner. Turn on the Nevada tape and you’ll see an ugly first half. Two missed tackles, two touchdowns allowed. Bad eye discipline, stuck in the backfield as the receiver runs by. He doesn’t have the speed to make up for it.

The mentality and ball skills, his WR background definitely helps, makes him a fit at FS. If he cleans up his technique a bit, he can be effective. An interesting mid-round pick for the Steelers if they don’t take one early.