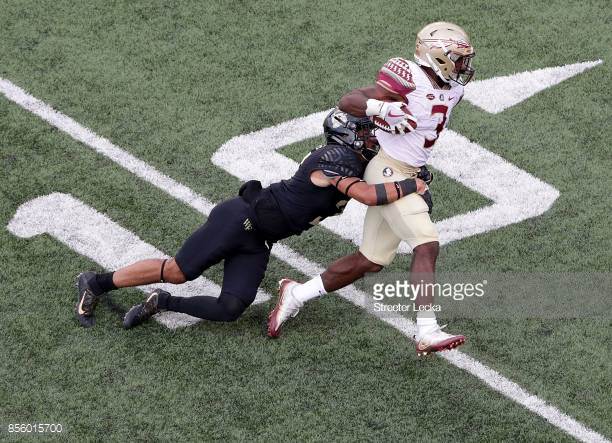 – Wrap up tackler who doesn’t go for killshot all the time, brings his arms to the tackle
– Above average athlete, good timed speed (4.5 flat)
– Low in pedal in deep half and doesn’t show stiffness flipping his hips
– Good football IQ, good anticipator/processor
– Fearless, physical and puts his face in the fan against the run and coming down the alley
– Does well to track the ball while remaining in phase and makes plays on the ball
– Threat in the open field, playmaking ability with the ball in his hands off interceptions or as a punt returner
– Played well against top competition (Louisville, Florida State)
– Young, left school early, room to grow

– Thinner frame and lower half, below average strength and explosion is only average (testing reflects: 35.5 vert, 9’9″ broad)
– Can’t always finish big hits because of his frame
– Aiming point as a tackler can be too low, bit of an ankle nipper and allows players to step up out of his tackles or change directions and avoid the tackle, some inconsistency in that area (missed four tackles in one game)
– Lack of size can get him pushed around/cracked easily by bigger receivers
– Not an elite athlete in speed, explosion, vertical
– Productivity dipped in 2017

Bates is somewhat of a tough guy to figure out. What isn’t is his NFL position and where he played in college. Unlike Justin Reid, Bates isn’t nearly the projection in the sense of a position switch. Bates was a free safety, almost always to the field side, and spent plenty of time in the deep half or middle.

Five interceptions as a redshirt freshman is nothing to sneeze at, though I wonder why the numbers dipped like they did last year to just one. He’s a threat with the ball in his hands with two pick sixes and a punt return touchdown. I like how he played against top competition. Had a great game versus Florida State, made a couple open field tackles on Lamar Jackson, and Clemson struggled to move the ball for most of the day despite a Wake Forest offense that went three and out four times in the first half.

When his aiming point is correct and he’s playing high enough, Bates is a sure-handed tackler.

And he has ball skills, too. Watch him carry the corner, get his head around while still staying in-phase, and bat the ball away.

It’s those types of plays the Steelers secondary is missing.

As you can read in the scouting report, many of the negatives center around his frame. Much different looking dude than say, Justin Reid (or even a second round option like Kyzir White). Smaller frame, thinner lower half. While he plays physical, some of his body blows don’t connect well enough. He’s a wrap up, drag down type. Not a punisher.

Hard for me to get a read on his tackling. I think it can be very good. Like I said, he’s not going for killshots. He can wrap up but has the strength to finish the play. But his Texas A&M tape was ugly, missing four tackles. The important caveat to that is a shoulder injury he suffered mid-season, and the Aggies game occurred when he returned, Maybe that had something to do with it. Still, I think he’s gotta work on his aiming point as a tackler and not try to hit as low.

Overall, I think he hits a lot of the Steelers’ boxes. He can be a reliable tackler, though never a big hitter (which I can live with for a FS), shows excellent ball skills, and checks some of the other things the team looks for (character, youth, Power 5 team).

Dave floated out the possibility of Bates being a first round pick last week and I was sorta dismissive of it. But watching more games of his, I don’t think it’s impossible for him to work into that conversation. Plenty of underclassmen “rise” throughout the process as everyone plays catch-up. Quite a bit to like although I don’t view him as elite and don’t put his ceiling on the same level as Reid.

Games Watched: vs Florida State, at Clemson, vs Louisville, vs Texas A&M