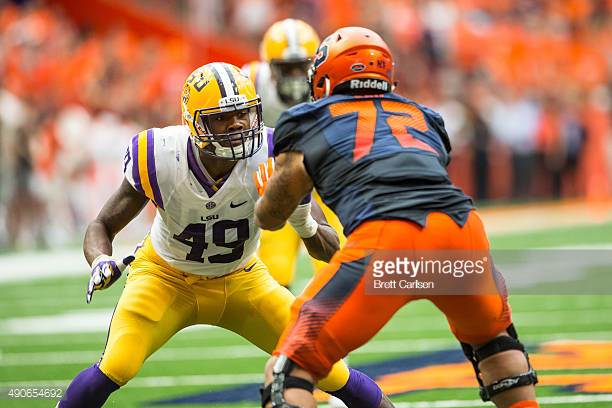 – NFL frame with room to grow and add, high-cut, unique looking body type
– Excellent length and hand size (33 1/2, 10 respectively)
– Violent, refined hand use and uses that and his length to create space as a pass rusher
– Has a go-to move (rip) and shows ability to counter off it (inside dip/rip, spin)
– Experience playing multiple positions and assignments, two and three point stance, in B gap, and spot dropping into coverage
– Makes an impact against the run when he uses his length and hands properly
– Stout when taking on pullers, square and doesn’t give ground
– Big hitter who looks to finish
– Does a nice job of staying on his feet in every phase of the game
– History of high-level production against top competition, though injuries slowed him down in 2017
– Every down/situation type player
– Quality starting experience

– Struggles to corner quickly enough after initially winning the edge, gets himself too far upfield and often has to steer back through the OT
– Average flexibility in tape and testing (7.16 three cone)
– Needs to do better job converting speed to power, footwork saps him of that
– Has to be more consistent at the POA in the run game, get off blocks instead of leaning on them and doing better job of containing the run
– Doesn’t always read tackles’ set in time and can run himself upfield instead of taking inside lane, moves sometimes feel predetermined
– Want to see more consistent play and effort, too easily slows down/gives up if initial move doesn’t work and seemed to tire later in games (weight could be an issue)
– Played at inconsistent weight, needs to find sweet spot
– Injury and off the field red flags that must be addressed

Does anyone remember Ali Highsmith, the once highly routed LSU linebacker who tanked his Combine, wound up undrafted, and didn’t do anything in the NFL? I’m not saying Arden Key is the next Highsmith but the past year couldn’t have gone much worse for him and his draft stock. More on that in a little.

As always, we start with the positives. In 2016, he was the premier pass rusher in the SEC and heck, nearly all of college football. Right up there with Myles Garrett. Coming into 2017, he was viewed as a top five pick. And with good reason. His hand use is refined for a young player, three years of college football, and he wins with that quickness and his length. Off the ball, he works hard to stay clean and prefers to rip the edge. This is him flashing in 2017, tossing the left tackle’s hands down and forcing the QB to climb.

He’s developed some counters too. It isn’t totally fleshed out and there’s times where he needs to win inside (even understanding not every pass rush is a two-way go), but he can dip/rip and has a pretty strong spin move. This from 2016 again on the left tackle. Unfortunately, didn’t finish the play.

He’s shown some versatility, lining up all over and some zone spot drops and he knows how to finish plays.

I’ve come to learn, and maybe I was a little late catching up, how important bend is to winning the edge. That’s where Jarvis Jones lost. That’s where Bud Dupree has struggled. That’s how top guys like Von Miller and Khalil Mack succeed. So that’s high on the list to look for. Testing-wise, his 7.16 three cone is not great and he didn’t show explosion in his broad or vert (31, 9’9″). On tape, it looks a little better but he’s often too far upfield even after disengaging, unable to corner and get tight around the edge. He can win but too often well past the junction point, taking time to circle back to the QB and giving the tackle a second change to keep the pocket.

Bottom of the screen. He sheds the left tackle but can’t get his hips turned upfield in time. When he does, it’s at the 50 and he’s a mile away from the play. A little tight, for sure.

I don’t know if it was a weight/conditioning thing on his 2017 tape but he too easily gave up on the play. Whether it was late in game or in the middle of a rush, if he didn’t win initially, he just leaned on the tackle and called it a day. Again, vs the left tackle. Gets punched, flails away, turns his back and ends the play before it’s over.

It’s frustrating to watch because there’s talent and production there. But I don’t think he’s going to be a stellar pass rusher. Then there’s the off the field worries. Reports from the Combine indicate Key didn’t sell teams in the interview room and it’s disappointing he didn’t run the 40 (he cited a lingering knee injury and will go at his Pro Day).

Looking at a borderline first round pick and I think more likely, he’ll wind up in the second. His ceiling is probably somewhere in the Derrick Morgan range. I think he’s got some Dupree in his game too, though they look and tested like two different dudes. His floor? Could be another Jarvis Moss, a first round pick who quickly flamed out ten years ago.