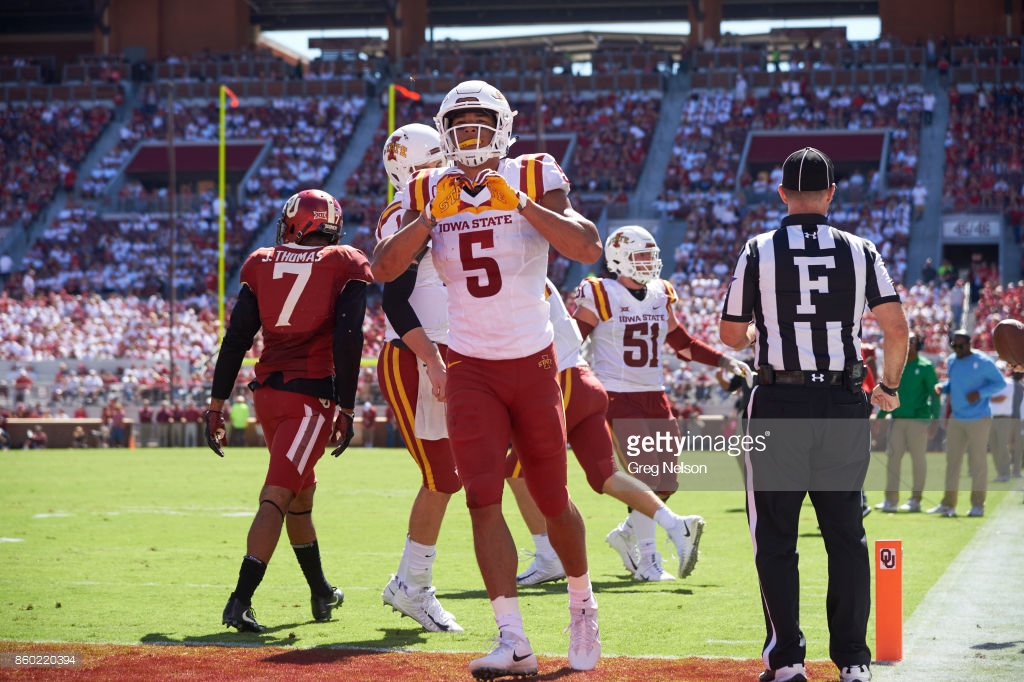 – Tremendous size with big hands (9 3/4 inches)
– Better athlete than you’d expect, not a plodder, tested tremendously well and though doesn’t show up 1:1 on tape, has more explosiveness and elusiveness than most with his frame
– Large catch radius with ability to extend away from his body and pluck the ball out of the air
– Quick to the tuck after the catch
– Red zone threat with the size to box defenders out
– Makes tough, combative catches downfield
– Tracks the football well vertically
– Shows hand use to defeat press coverage and separate at the top of the route
– Willing blocker who takes pride in the run game
– Showed some versatility, played slot and the X
– Excellent production and elite starting experience, viewed as a team leader
– Football bloodlines
– Minor punt return experience

– Didn’t exactly play to tested numbers (4.55 40, 38 inch vert, 10’2″ broad)
– Build-up speed runner
– Tendency to drift on routes and get too far upfield
– Has trouble making catches in traffic over the middle
– Occasional drop where he doesn’t look the ball all the way in

Lazard flashed at the Senior Bowl and then really popped at the Combine, showcasing impressive numbers for how big he is. 4.55 40, 38 inch vert, 10’2″ broad for a guy who looks like a tight end at 6’5, 230 pounds. That explosiveness doesn’t quite translate to the tape but it’s still impressive for how big he is. He’s got a large catch radius, gets upfield quickly after the catch, and can create space at the top of his route.

Not the cleanest route here, he isn’t as explosive out of his break on the out cut as maybe you’d like but he sells the vertical threat well to keep the corner from driving and then makes a nice hands catch while getting his feet in bounds.

And he does well to adjust to the football, again, using his physical skillset to make plays others simply can’t. Insane concentration to pull in those TD after the corner bats it away.

He’s a better route runner than you’d think. He’s capable of working the middle of the field. But I do want to see him make tougher catches in traffic over the middle. Some teams are going to view him as a slot or a tight end so these are the types of plays he’s going to have to make. Late drop against WVU when they were down by four. Brought up fourth down and the Cyclones wound up losing.

I get that’s a tough play to make. But for where he’s projected by some, one I want to see him make.

Lazard is definitely an interesting profile. Someone who I think will wind up on the Steelers radar as a Martavis Bryant replacement for 2019. He’s the height/weight speed guy, not that he’s running a 4.4 but at his weight/frame, it’s almost as impressive. A vertical threat who fits the Steelers offense well. Seemingly very high character too and if free agency is any indication, that’s something they’re going to value in the draft.