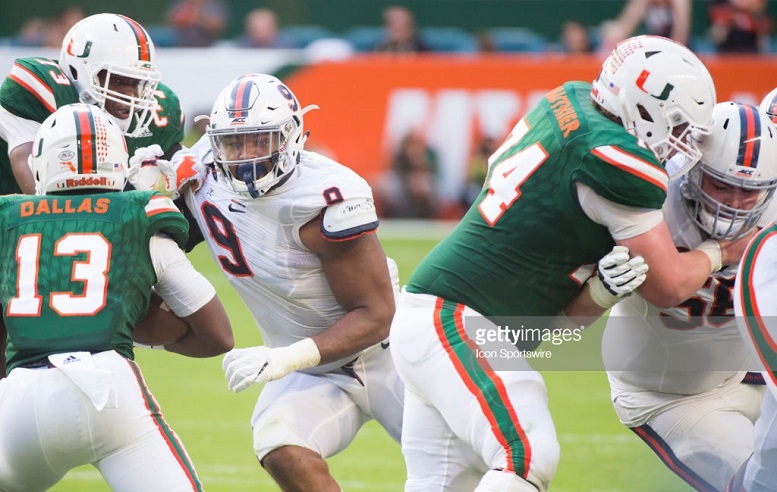 – Quick off the snap
– Gets into the blocker’s body first
– Active, powerful hands along with forceful upper body
– Good motor, always working
– Nice bull rush
– Can line up in a 2,3, or 4 point stance up and down the line
– Athletic enough to drop back into coverage

– Stiff leg movement that doesn’t match upper body
– Over-reaches, allowing him to get off-balance
– Comes straight at blockers
– Will be 23 years old before end of 2018 season
– Questionable vision

Facing a third and 7, the defender lines up splitting the right tackle and tight end in a 2-point stance. He slants inside, forcing a double team with the guard and tackle. #9 keeps on pursuing the signal caller, getting his arms up to disrupt the throw. This causes the quarterback to toss the pigskin to a shorter target, which results in a 4th down. The play shows off his quickness of the snap and the way Brown uses his hands to work around blockers.

Lining up with outside shade on the right tackle, Brown is in a 3-point stance. The center fires off the snap going directly into #9. The low man aka the center wins this battle knocking the defender back and seals him off from the running back. This helps set up a 30 yard run on a 3rd and 16. The Cavalier gets too high and doesn’t see the center pulling which makes him a liability if he isn’t slanting into the play.

Lined up on the strongside splitting the guard and tackle, Brown gets off the snap quickly beating the center as the guard pulled away. #9 comes across high and out of control; this allows Royce Freeman to make the defender try to wrap the back up on his knees. So instead of a 3-yard loss in the backfield, the Virginia defense gave up a 85 yard touchdown scamper to Mr. Freeman. Staying balanced and protecting his gap could have prevented that.

Getting double teamed off the snap by the guard and tackle, Brown initially occupies both blockers. The tackle disengages while #9 keeps pursuing the ball carrier in the backfield while wearing the guard as a shield. The defender frees his left arm, reaches out, and clotheslines the back still battling the guard. I like the way this play shows off his upper body strength and motor.

Brown is a high-effort player, who lacks the ability to anchor with his lower body. He had a good combine which might take him out of the late third day talk. If #9 is still there in the early seventh, I think he would be worth the pick for Pittsburgh to see if they could develop him into a more well-rounded defender, especially after being so highly recruited out of high school.