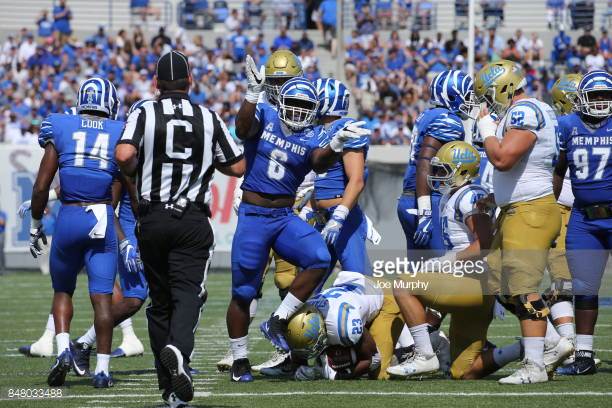 -Squatty, powerful frame
-Consistent tackler with strong numbers year-to-year
-Shows flashes of straight-line speed that’s elite for position
-Can play inside or outside and has flashed as a pass rusher
-Comfortable spot dropping or playing man coverage over middle of the field
-Flows well sideline-to-sideline and diagnoses plays quickly

-Tends to drop his head when engaging blockers in the box
-Lacks strong hand usage at point of attack
-Relied too much on athleticism as an edge rusher
-Tight hips when trying to turn the corner as an edge rusher
-Struggles with process on how to engage blockers, i.e. when to slip around, or when to take head on

Memphis linebacker Genard Avery was a massive sleeper at linebacker prior to the NFL Combine a few weeks ago in Indianapolis. After testing exceptionally well for the position, Avery became a hot name among the draft circle.

Popping on the tape, Avery nearly jumps off the screen with his athleticism and speed for the position. Yes, he’s a bit small, but he flies around all over the place.

Oh lord, look at that pursuit speed! This guy is impressive. Diagnoses plays quickly in front of him, and then has the speed to run step-for-step with UCF’s back to the sideline. pic.twitter.com/IJuV0Iy7Vd

If you read my Roquan Smith profile from early March, you can see some serious similarities between Smith and Avery’s build, as well as the athleticism each has flowing sideline to sideline.

Look at the way Avery runs down UCF’s Taj McGowan, forcing him to stretch the run to the sideline for the tackle for loss. McGowan was a homerun hitter at running back last season for the Knights due to his breakaway speed, but even he can’t outrun Avery to the sideline.

Drops into zone coverage here, but look at the click and close speed here to track down McKenzie Milton on the QB scramble. TFL. pic.twitter.com/nizzrMAGFo

In the same game, Avery shows off his closing speed again, flying downhill after dropping into coverage to slam down quarterback McKenzie Milton behind the line of scrimmage on a quarterback scramble.

Avery has good eyes for the position, constantly seeing where the football is and what’s happening in front of him. You can tell he has a ton of belief in his speed, because he drops into zone coverage here, and as soon as Milton begins to pull the ball down, Avery plants and bursts forward, closing ground in a hurry to get to Milton for the stop.

Really like the way he punches pulling blocker in the hole and then slides off to make the stop. His athleticism allows him to make plays like this often for Memphis. pic.twitter.com/4mtXEdM7qy

He’s not just a run and tackle linebacker either; he can play against the run in the box, where he can use his former all-state wrestling skills and apply them to the position. Look at the way he punches out at the pulling lineman in the hole, allowing him to stay clean, sliding off to make the stop for a short gain.

While he does struggle with consistency in situations like this, he has shown the ability to do it correctly. He’s raw, so it’ll all come down to coaching at the next level.

As an athletic linebacker, he’ll undoubtedly continue to get more love as we draw closer and closer to the NFL Draft. However, it’s important to keep in mind that he wasn’t much of a name prior to the combine, so don’t go overboard with the hype.

He’s good, but he’s not top 50 good, as I’ve seen one or two draftniks overreact to after seeing his tape. He still struggles with hand usage and can get lost behind blockers when he is slow to diagnose, but he has all the tools to be a very good starter in the NFL.