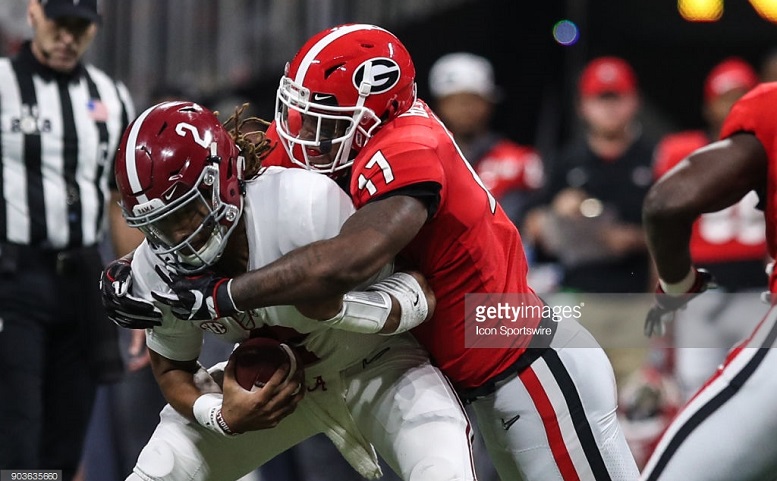 – Very fluid in space, can coverage a lot of area in zone coverage
– Keeps pad level at good height so he can separate and make tackles
– High motor, does not give up on a play
– Uses long powerful arms to set up swim move
– Experience with hand in the dirt and standing up

In a world that functions on the ‘What have you done for me lately’ basis, Georgia pass rusher Davin Bellamy has done a lot based on the last time the world has seen him in action. His final college appearance was a 1.5 sack performance against Alabama in the National Title Game and now Bellamy hopes to use this performance as he awaits draft day, just over a month away.
A player who showed much flash in his final college appearance, the National Title Game offered a preview of Bellamy’s best assets as a pass rusher. The Georgia defender often uses his length (33 ¼” arms), quick handwork and high motor to get to the quarterback.

Bellamy’s long arms give him a distinct advantage over opposing linemen and the Georgia pass rusher knows how to use his best weapon to succeed. Watch above how he swipes and negates the Alabama’s tackles hands, throwing him off balance for a quick second and giving him a lane into the pocket. While he may fall just short of a sack, the swipe and swim move are the kinds of tools that will give Bellamy an opportunity to hear his name called this April.

The NFL is a league that thrives on consistency and Bellamy’s ability to use his hands to separate and swim by opposing lineman is as consistent as they come. What is even better though is the pass rusher continues to notch pressures and sacks against top competition. The above sack came against Notre Dame tackle Mike McGlinchey, a projected first round pick in this year’s draft. McGlinchey is no slouch, the lineman stands at 6’8, weighs 312 pounds and has been Notre Dame’s captain for the last two seasons. Bellamy makes quick work of the future NFL tackle and notches a game ending strip sack – that is the kind of play in crunch time that NFL scouts will love to see.

Jumping back to the matchup against Alabama, Bellamy really put on perhaps his best showing at the right time. With millions watching, the pass rusher showed ability as a pass rusher, a high motor and never give up attitude, and also some upside defending the run. At 6’5, 245 pounds, Bellamy is thin and not as strong as many NFL ready pass rushers but against Alabama, the Georgia defender showed ability to play at an adequate pad level and then separate to make a play in the backfield. He will have to make plays like the one above more consistently at the next level to see prolonged success.

The Georgia outside linebacker is very fluid in coverage and shows comfortability dropping into a zone. Watch above as Bellamy keys in on the possible screen pass before smoothly settling back in his zone and making an easy, quick tackle on the Oklahoma receiver after the catch. Though he bites a tad, the backpedal into his zone is effortless and without a hitch, turning a potential big gain into just a marginal one.

The one area holding Bellamy back is his lack of counter or plan while rushing the quarterback. If his quick swipe and swim move is unsuccessful, he is left helpless without an idea of what to do next. That is visible above as he struggles to separate from Oklahoma tackle Bobby Evans. Part of this is due to Bellamy’s thin build and lack of strength, as it leaves him without a competent bull rush or ability to separate.
It is hard to see starter upside in Bellamy unless he can add strength and develop more moves in his pass rush arsenal. A probable late round selection, the Georgia pass rusher will likely have to scratch and claw his way up a depth chart.

Games Watched: vs Oklahoma, vs Alabama, vs Kentucky, vs Tennessee (2016)