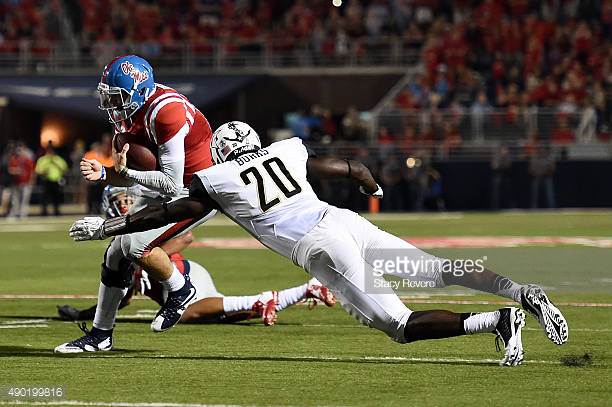 – NFL-looking frame with ability to add weight if team asks him to
– Impressive athlete in testing and on tape with sideline range, fluid mover whose safety background shows
– Takes good angles to the football, good run fits
– Physical player and a “want to” as a tackler and defending the run
– Versatile, moved around who didn’t get to settle into one spot and grow
– Leader and co-captain, considered to be high character
– Durable player, showed toughness
– Productive career vs top competition, excellent starting experience

– Really struggles to disengage and defeat blocks in the run game, consistently swallowed up and vulnerable in power schemes between the tackles
– Athletic but not as strong in coverage as you’d expect, too slow to react to route concepts and has trouble locating the ball to finish the play
– Needs to be a more consistent player overall though that may be partially contributed to being shifted around
– Trouble finishing tackles, falls off RBs too often
– Not a successful pass rusher from the interior or off the edge
– True position in the NFL?

Oren Burks first caught my eye at the Senior Bowl, called up for the final day of practice, similar to what happened with Javon Hargrave in 2016. First impressions were good. An excellent athlete and one of the best “movers” of anyone down there which to be fair, wasn’t saying a ton.

Finally got around to watching him and…I’m a little disappointed. Maybe my expectations are too high. And he should get credit for having to play a new position basically every time he laced up his cleats. But there are some definite flaws in his game, big ones, and we’ll get to that. But first, the good.

The background is obviously interesting. Safety turned hybrid turned linebacker. That type of resume, that type of athlete (backed up by how he tested) is what the NFL demands today. I pulled a game against Georgia from 2015 of him nearly picking this pass off. Great read, in position, but drops the ball. Like a linebacker.

Watch his flow down the line to make the tackle on this perimeter run, too. Skills translate.

But the problem is interior runs when guards and centers work to him. He struggles to disengage, like a safety, Routinely swallowed up and doesn’t have the strength or hand use to defeat the block. It’s not that he’s contact-shy or won’t take on blocks, he absolutely will, he just can’t do anything if the linemen engage him. Two examples. Against Kentucky, watch #73 stick to him.

And in coverage…also a little disappointing. Missouri was a rough game where he got beat three times.

He’s reminding me of Travis Feeney minus the injury history, which is obviously a big advantage. He’s raw, going to get pushed around versus the run, though he’s more physical and not quite as lanky. There’s potential to become a successful player in the NFL but I can’t help but think he’s better off either going back to safety or, and this is what I’d prefer, play in that hybrid role in sub-packages. David Bruton/Jaquiski Tartt like.

I’d stick my neck out and say he’s on the Steelers’ radar. For his versatility, productivity, and high character. Definitely fits the bill.

Games Watched: vs Georgia (2015(, vs Alabama, vs Kentucky, vs Missouri, Senior Bowl