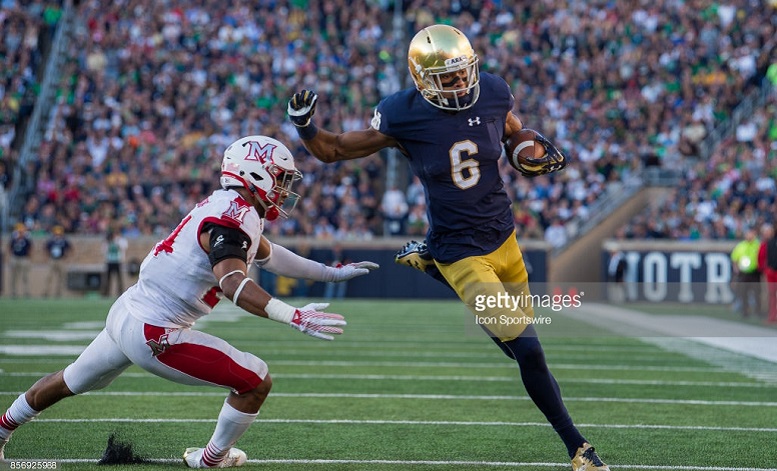 – Deceptive speed
– Long, flowing body
– Quick footwork that allows him to accelerate in a hurry
– Good concentration
– Willing to catch passes over the middle
– Deadly on crossing routes
– Gives decent effort as a run blocker

– 2017 Biletnikoff Award Watch List
– Played in Under Armour All-American Bowl
– Speaks English, German and French equally well
– Mom was born in Germany and Dad was a two-time Mr. Universe/three-time Mr. World in weight-lifting
– Played in 32 college games with 92 receptions for 1,484 yards (16.1 yards per reception) and 13 receiving touchdowns. Also returned 1 punt for 18 yards and blocked a punt that was returned for a touchdown his freshman year
– His first name is a play on the word that means “staying calm under pressure”

Lined up outside on the right side with no one in his face at the line of scrimmage, St. Brown gets an unmolested release and cuts across the field 3 yards deep. The receiver catches the ball in stride and accelerates while rounding the corner. #6 hugs the sidelines and reads his teammates’ blocks to streak to the endzone. This was a simple shallow crossing route that became a 75 yard touchdown due to foot speed and nice field vision.

On a 3rd and 13 near the Notre Dame endzone, the wideout begins split out off the ball on the right. Just before the snap, he is sent in motion and dips into the shallow middle while fully accelerating as the ball makes it into the quarterback’s hands. The signal caller feels immediate pressure and tosses the pigskin high and behind the receiver. It would have been a difficult catch, but #6 did not have to be at full speed with no one within ten yards of him on any side. His ill-timed jump along with half-efforted one-handed attempt makes it appear that the Golden Domer’s full effort wasn’t demonstrated there.

Split out wide left in the red zone, #6 gets off the line of scrimmage without a hitch at the snap. He finds his spot in the endzone, boxes out his corner, tracks the pigskin in the air, and grabs the ball at its highest point getting one foot in bounds to score the touchdown. This shows off his ability to use his body like a power forward would in basketball, clearing out his space to score under the boards. St. Brown needs to turn up this physicality in his game.

St. Brown lines up at the top of the formation with his corner off the line about 7 yards. At the snap, #6 does a stutter step while turning inside for the quick screen strike with blockers out in front of him. He finds a crease, darts between two defenders, accelerating and falls forward for a first down. I love the way he is willing to mix it up in the middle of the field near the line of scrimmage, much like former Steeler Hines Ward, with only his quickness and vision.

Equanimeous St. Brown is a talented receiver who certainly flourished with future second rounder DeShone Kizer in 2016 (58 receptions for 961 and 8 touchdowns) versus Brandon Wimbush in 2017 (33 catches for 515 yards and 4 touchdowns). With the right quarterback and offense, the talented Golden Domer could make an impact in the NFL this year. I’m not convinced that the Steelers would be willing to part with the draft capital to bring him to Pittsburgh though. He will need to adjust to more physical coverage, especially near the line of scrimmage, or will be forever stuck in the slot.