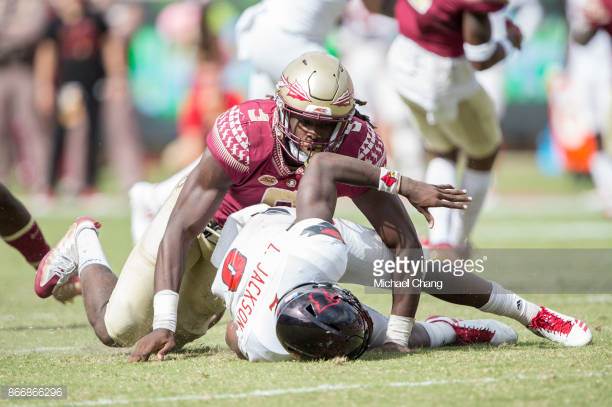 -Limited pass rusher who doesn’t use his hands well, in terms of pass rush moves
-Relies on athleticism far too often
-Slow to disengage off of blocks against the run
-Lacks consistency as a defender
-Lengthy injury report dating back to high school
-Loses balance at times against blockers, often leaning in

If NFL edge defenders were built in a lab, they’d look an awful lot like Florida State junior Josh Sweat, who happens to strike a similar resemblance to Houston Texans star Jadaeveon Clowney in build alone.

However, it’s important to remember that Sweat suffered a very serious knee injury during his senior year of high school, which nearly caused him to lose his leg. While he was able to keep his leg (obviously), the injury certainly hindered Sweat’s abilities during his three seasons at Florida State.

Sweat had a high pain tolerance with injuries in his three seasons with the Seminoles, fighting through a number of knee injuries to stay on the field and produce. While his numbers aren’t eye-popping, he flashed his abilities at times on tape, and tested off the charts at his Florida State pro day.

The testing numbers look great, especially when you consider that Sweat was able to lose the bulky knee brace he played in the last three years, allowing him to really show off his abilities.

Not once on tape did I see Sweat get that much bend and flexion in his lower half when turning the corner. The knee brace had to play a part. While I understand football in spandex isn’t football in pads, this is a positive sign for Sweat.

On tape, he flashed athleticism at times, but you could tell he wasn’t 100 percent healthy.

Playing the run here, Sweat has a free lane to Clemson’s Wayne Gallman during the 2016 season. He’s clumsy on his feet, nearly falling to the ground, allowing Gallman to slip past.

I saw these types of plays a lot from Sweat on tape, but then he’d turn around and put up plays like this in space that intrigued me.

On the read-option here against Deshaun Watson, Sweat keeps his lower half underneath him, allowing him to bounce side to side, chasing down Watson behind the line of scrimmage. He certainly has the motor and want-to to succeed as an edge defender, but it will come down to his flexibility in his lower half once the knee brace is off.

As a pass rusher, Sweat flashed a few times on tape in the last two seasons, but too often he didn’t seem to have much of a pass-rush plan, when it comes to hand usage and counters.

When he did use his hands well, he won cleanly.

Granted, this sack comes against a tight end from the Citrus Bowl against Michigan, but look at the hand usage and the quick, efficient swim move to win cleanly, leading to a blindside sack on Wilton Speight.

I think Sweat is a very intriguing prospect, thanks to his build and testing numbers, but he’s definitely going to be a project in the NFL, considering he has a lot to learn as a defender at the next level.

Due to him almost certainly being a project, I wouldn’t use a first round pick on him, but I’d definitely feel comfortable taking a shot on him in the second or third round. He could be a major value in that range.