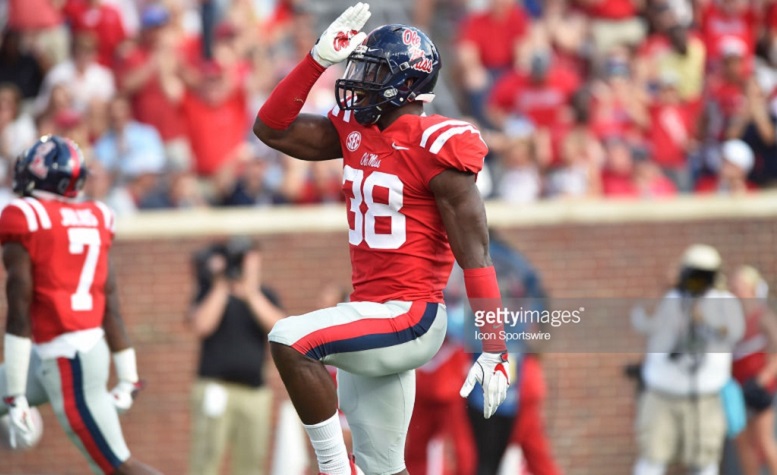 – Athletic player, high-cut and quick
– Shows ability to dip and bend the edge
– Good get-off
– Experience standing up on outside
– High effort player and shows willingness to chase play down from behind
– Effective inside stunter
– Played on both sides of defense
– Seemingly great character

– Problems converting speed to power
– No real pass rush plan, arsenal of moves and virtually no counters
– Not good at setting the edge against run
– Problems disengaging from blockers both against the run and as pass rusher
– Not used as a dropper in coverage
– Not a lot of high-quality sacks

The first thing that jumped out at me concerning Haynes when looking at his tape is how he struggles at setting the edge against the run. On this particular touchdown run by Auburn, you’ll see Haynes face an h-back and not only does he lose the initial battle, he gets turned inside, thus completely taking himself out of the play.

Here is another example of Haynes getting pushed around at the snap of the football and thus pushed back off the line of scrimmage. To his credit, however, he is able to disengage from the blocker eventually and factor into the end of the play that ultimately resulted in a long gain and a new set of downs.

As far as Haynes’ college sacks went at Mississippi, quite a few of them were a result of high-effort, as opposed to high quality one-on-one wins. This sack against Auburn from last season, for example, shows a good, yet uncontested get-off followed by him working around the block of the h-back and thus back toward the scrambling quarterback. His effort and athleticism allows him to finish the sack.

The play below against Auburn is probably a good microcosm of Haynes as a pass rusher last season. It starts with a good get-off and his followed quickly by him getting his 33-inch arms in the chest of the tackle. While he initially forces the tackle back for a pressure, he can’t sustain his power and thus finish his drive back to the quarterback. He also can’t unstick himself or counter off the tackle for inside access to the pocket. The quarterback subsequently is able to escape to his right to complete a pass for a first down.

Here is one more clip from Haynes’ peffomemce against Auburn that shows both good and bad. On this jet sweep play, Haynes doesnt do a great job at protecting his lowerr body from a cut-block and that resuklts in him off his feet. However, Haybnes does manage to get to his feet veerty quickly and ultimately chases the ball-carrier down the field to make the tackle.

When you look at Haynes’ career stats at Mississippi you’ll find a very productive player and especially when it comes to his sack and tackle for loss totals. However, when you look at his tape from the last three seasons, you’ll notice that a large amount of his sacks weren’t high-quality ones and instead a result of him working hard after a play breaks down. While he has the speed to win the edge, he doesn’t always flatten out consistently enough. Additionally, if he can’t win with his first two-handed shock to the chest, he really shows no real arsenal of counters or moves. As mentioned, he struggles to convert speed to power and a lot of times winds up stuck to the blocker.

Haynes will likely be regarded by NFL scouts as a classic tweener and thus is likely to be looked at by both 3-4 and 4-3 teams as an outside linebacker and defensive end. He is an incredibly raw player, who first and foremost, must get much stronger at the NFL level and then work on becoming a more complete pass rusher. It’s hard to envision Haynes being any more than a depth edge player and special teams contributor upon him entering the NFL. He might could be used as an occasional situation pass rusher while a team attempts to develop him. Because of this, I expect Haynes to be selected somewhere during the third or fourth round. I suspect he’ll perform well at the scouting combine, however, as he is very athletic.