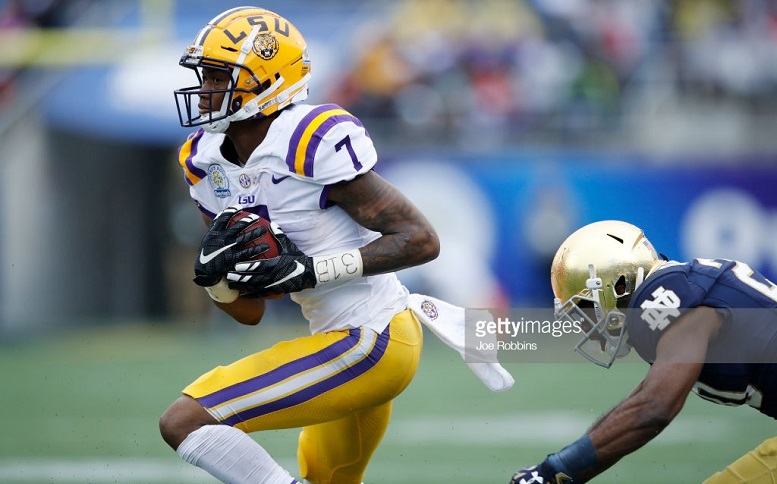 –Limited route runner
–Game is more speed and size, than technique
–Loses hand and other physical battles to defenders
–Some problems finding ball in the air (including unnecessary jumping)
–Played on a run-focused offense
–Body catching

LSU faced with a third and 10 on their opponents side of the field, the receiver is split out wide left with a 5 yard cushion. At the snap, #7 races past the yard marker, turns his body completely around, catching the pass with his arm and belly. This totally stops his momentum, but the wideout sees the defender bearing down on him, so Chark dips his hips. This allows the defensive back to fly right past the LSU playmaker. The Tiger receiver accelerates in the open field, racing down the sidelines before getting forced out. I like the way this play shows off his raw speed while it also demonstrates an awful body catch that any NFL defensive back would have smashed away.

Split out far right on a third and 10, the LSU receiver has a 3 yard cushion from the opposing corner. At the snap of the pigskin, the defender attempts to re-route #7, but the Tiger does not slow down. In fact, once Chark is back in frame, he has a 3 yard radius from which to track down the ball. The wideout appears to lose track of the ball, but manages to scoop it low. The Auburn free safety strips the pigskin out of Chark’s arms and another defender picks up the ball. His speed and size are awesome, but I am quite concerned about his ability to track passes in the air and secure it after.

Originally split out far right, the wideout is then brought in motion for a jet sweep handoff at the snap of the ball. #7 reads his blockers while fully accelerating, makes the first man miss in the open field for a nice small gain. While not an NFL staple, a receiver jet sweep can force defenses to crowd the line of scrimmage, which may free something up on the backend.

With an eight yard cushion in the slot, Chark screams off the line of scrimmage at the snap and is forgotten or misplaced by the Ole Miss defense. The wideout keeps running down the field with over ten yards of separation, tracks the pigskin in the air for an easy touchdown grab with defenders barely around him. While the highlight shows off his amazing openfield speed, it is more about the horrible defensive call that was made on that play.

DJ Chark is fast in a straight line, has quick feet, and is bigger than most defenders. These skills will help him at the next level, but it’s his inconsistency tracking the ball, body catching, and securing the pigskin that cause me concern. In time, I believe he could develop into a Mike Wallace type of weapon, but deep threats like that are not valued highly in the NFL. Just ask newly signed Raven wideout John Brown. The Steelers should pass on Chark, especially with his more costly price tag of an early second day pick.