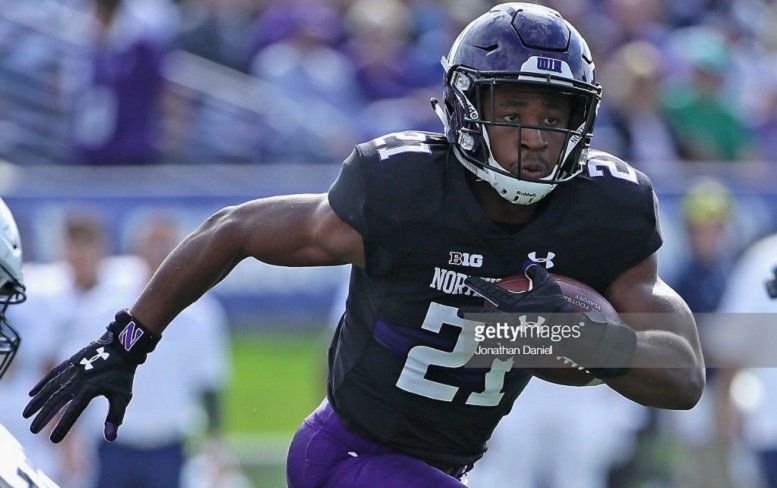 – Follows his lead blocks and is able to sniff out a running lane
– Tested well in agility drills and lateral agility shows on tape
– Able to create yards after contact despite his small size
– Consistent hands as a receiving threat out of the backfield
– Tough, shows ability to pinball off tackles
– Slippery elusiveness
– Reliable and smart pass blocker

– High workload, already accumulated 1142 carries in college career
– Doesn’t have elite speed to stretch runs to sideline
– Not able to make something out of nothing, needs space to operate
– No elite burst to the line of scrimmage
– Stops and goes at times, which limits acceleration

You are not going to find more tape on any one player than you would likely find on Northwestern running back Justin Jackson. That’s because the Northwestern back has carried the football a whopping 1142 times in his college career, sixth most in NCAA history.

More on Jackson’s workload later, for now let’s get into who he is as a player, which is an agile, tough ball carrier with three down ability. Jackson used his smarts, elusiveness and toughness to accumulate 5440 rushing yards, third most in Big Ten history.

Jackson is a smart, patient runner who will wait for his blocks to develop before pursuing a clear running lane. Not one to be overly aggressive, the Northwestern back smartly waits for his lead blocks to open a lane for him. Visible on the play above, Jackson’s vision and mental processing give him the time and ability to rip off a big gain.

Now here’s an interesting scenario. It is third and one and you got a 200 lb running back in the backfield. The situation obviously favors the defense but watch as Jackson picks up the first down and more. Jackson breaks three tackles on this play with a high cut. For overly aggressive defenders, his high cut elusiveness works like a charm.

It would not be surprising if the words Justin Jackson are actually synonymous with elusiveness as his ability to slip through tackles is incredible to watch. Watch above as he first uses his quickness to take Michigan State linebacker Chris Frey (#23) out of position and then slips between two more tackles to pick up the first down. His extra effort to lunge forward for the first down is also something to make note of.

One consistency flashed throughout this report is Jackson’s toughness and effort to find the first down marker. Watch above as he catches a pass about 5-6 yards behind the scrimmage and is able to pinball off a handful of tackles to convert the third and 10. That is the kind of grit and toughness that makes or breaks a running back. While he may just be 200 lbs, Jackson is going to give you all he’s got.

Jackson is also a reliable third down back as he can catch and block for his quarterback. He has racked up 122 receptions in four years and has showed ability to consistently reel in the football. As a blocker, the Northwestern back shows ability to not only anchor against larger competition but the speed and football IQ to shift across the line to pick up any incoming blitzers.

Using a patient approach, sometimes Jackson can get indecisive instead of just pursuing an open lane. Watch above as he flashes his trademark stutter, bouncing away from an open lane and right into traffic. While Jackson may be able to create additional yardage at the second level, he often can only give what his blocking provides at the first level. While the patient running works when his blocking follows suit, you would like to see him become a one-motion runner and burst through the hole when it presents itself.

Another area to be weary about and that was touched on earlier is his workload. 1142 carries in 51 games even exceeds the work load of the Steelers very own Le’Veon Bell. For comparison’s sake, Justin averaged 22.4 carries per game while Bell, even at his incredible usage has only averaged 19.8 carries per game. Durability may not be a pressing concern at the moment but it is a lingering thought.

Jackson’s workload is a fear rather than a problem and taking a page out of Mike Tomlin’s book, it is not wise to live in your fears. Adding the running back would add a proven three down runner who can help chip in on a running back rotation.

Games Watched: vs Penn State, vs Wisconsin, vs Michigan State, vs Maryland