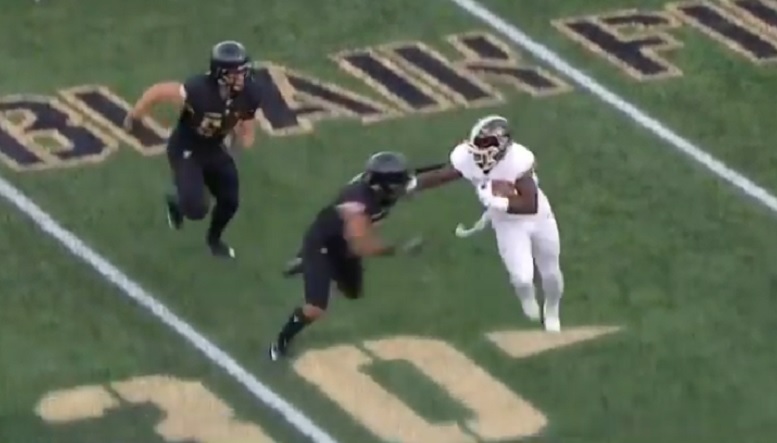 – Can out run defenders to the sideline with ease
– Smooth running stride makes Edmonds appear faster than his 4.55 speed
– Can change direction efficiently
– Runs with a full steam of momentum making Edmonds a tough target to square up
– Has second level vision
– Uses athleticism to run through arm tackles
– Quick cut lateral agility
– Low center of gravity, tough to bring down

– Durability concerns, missed seven games due to injury in senior year and tweaked ankle at Shrine game
– Frequently tries to bounce runs outside
– Struggles with vision in between the tackles
– Pass protection skills a major concern
– Relies more on athleticism than IQ

Fordham running back Chase Edmonds knows all about what being a big fish in a small pond is like. The running back has dominated the FCS and Patriot League over his college career, finishing with 5862 career rushing yards and even rushing for a league record 1838 yards in 2014.

Now the once big fish looks to leave home and travel to an even bigger pond – the NFL. Though he comes from a small school, Edmonds certainly made a name for himself in college with his blazing speed and quickness. And it will once again be those physical tools that give the Fordham running back a chance to make a name for himself in the NFL.

Edmonds is fast but not only is his speed impressive, his ability to change direction without losing speed is downright incredible. Watch him take the handoff, hit the hole and then side step out of an evading tackle while then continuing in full speed. The running back’s greatest ally is his speed as his athleticism often leaves defenders out of position or at an impossible angle to make a tackle.

When you are as physically gifted as Edmonds, it means that you can make a whole lot of nothing into something. On the play above, watch how he hits the hole drawing the blitzing safety in before quickly changing his running direction and turning upfield. Edmonds’ shifty running motion makes it difficult for defenders to square up on him, as it often takes more than one defender in the open field to bring him down.

Though some may view Edmonds as undersized, the running back runs like a brick wall with legs, showing incredible contact balance. The Fordham running back will continuously bounce and deflect off multiple tackle attempts before finally going down. Thanks to his balance and low center of gravity, Edmonds is able to bounce off three tackles and pick up the first down.
Coming from a small school, Edmonds is quite the underdog. If there’s one idea to keep in mind when discussing underdogs, it is that they are underdogs for a reason, whether it be a physical or mental, there is a flaw that separates them from the favorites. For Edmonds, it is no different as not only did he put monster numbers against lesser competition but he does have a fatal habit. That fatal habit being that he often tries to bounce runs outside, using his speed to just out run the competition. While this may have worked sometimes in the FCS, it is surely not going to fly against freakishly athletic NFL defenses.

Evidence that his habits will not work for him at the next level already showed up on his college tape. Watch above as he stutters at the sight of a crowded line of scrimmage and runs for the outside where he is wrapped up for a loss. Sometimes the NFL is about taking what you are given and not trying to turn every play into a home run. Edmonds could have possibly taken his team out of field goal position on the above play (let’s pretend Fordham is not down 51-6).

While Edmonds was able to get away with this in the FCS, he is going to have to show more willingness and discipline to run up the gut at the next level. Otherwise, the former Patriot League star will be reduced to an occasional role as a change of pace back.

Edmonds is a good gadget and excellent in space, it is just finding ways to use him while not being predictable that will be the challenge.