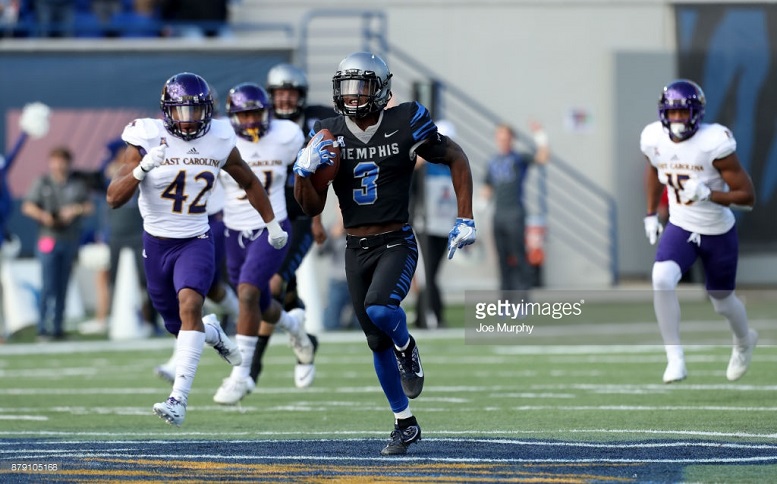 – Quick choppy feet.
– Well done head fakes that set up his coverage
– Tracks ball well in the air
– Does a good job shielding defender from ball
– Catches ball at highest point
– Creates separation, then makes receptions in stride
– Dangerous in open field, can look like a slalom skier weaving in and out
– Can play on the inside or outside and is usable in the return game

– Will be turning 24 years old in October
– Some wasted motion running routes
– Didn’t run at Combine due to injury in bowl game, looks more quick than fast on tape
– Doesn’t seem to run his short routes with same zeal and patience as longer ones
– Concentration issues
– Runs a bit tall, allowing for defenders to cause more damage when making a tackle
– Not much of a blocker, but in fairness didn’t do a lot of it

– Former high school champion in hurdles and long jump
– Holds his high school records in triple jump, long jump, 300m hurdles, and 110m hurdles
– Former walk-on player at Memphis
– 2016 Second team All-American Conference
– Collegiate career totals: played in 38 games, had 238 receptions for 3,590 with 37 touchdowns, rushed 31 times for 148 yards and three touchdowns, completed 1 pass out of 3 attempts for 35 yards, returned 6 kickoffs for 136 yards, and returned 20 punts for 136 yards as well
–Was a redshirt his freshman year and had an preseason injury that made him miss 2014

With the Memphis Tiger offense in a spread formation in the Cyclone red zone, #3 lines up split out wide left in the slot. He freezes in his spot at the snap, catches the ball out in front, keeping his eyes on the blockers, accelerates while bobbing and weaving, then diving for the touchdown. This play shows his quick feet, slalom open field skills, and nice vision near the end zone.

Lined up on the line of scrimmage in a spread formation on the three receiver side, Miller is facing off coverage that is almost 8 yards away. At the snap, #3 races past his corner, flipping his hips running a post route. He gets a little separation, tracks the ball well in the air, and makes a nice reception by fully extending to grab the pigskin. The Tiger receiver does a nice job of making sure his hands are underneath the ball and he lays out to make the catch with the defender close by.

Split out wide left on a third and 1 with the UCF Golden Knights lined up to defend the run, #3 attacks his corner at the snap of the ball. He swats away the defender while looking inside for the pass. Miller creates a crease to make the reception, but drops it. The pigskin hit him in the hands, but the wideout appears to be thinking about the green open space in front of him instead of securing the ball first. It’s these concentration lapses that are concerning.

On top of the your screen, our hero is lined up facing a corner giving him an 8 yard cushion in the Huskies red zone. #3 explodes off the line of scrimmage, uses a double move to create 6 inches of separation, shields the ball from the defender, tracks the pigskin while catching it at its highest point. Miller does a nce job of getting both feet down for the score. This play demonstrates that the former Tiger is quite the scoring threat, especially near the endzone.

Anthony Miller played in a spread heavy offense and he took full advantage of defenders with his quick feet and long ball tracking. I believe he is a very good receiver who could be a good match fo the Steelers; however, his age and lack of concentration are certainly concerns. If the former Tiger is available at the end of the third round, he could be in consideration if Pittsburgh has already addressed their bigger defensive needs. I doubt Miller lasts until the fifth round, but he would be a huge get if available.