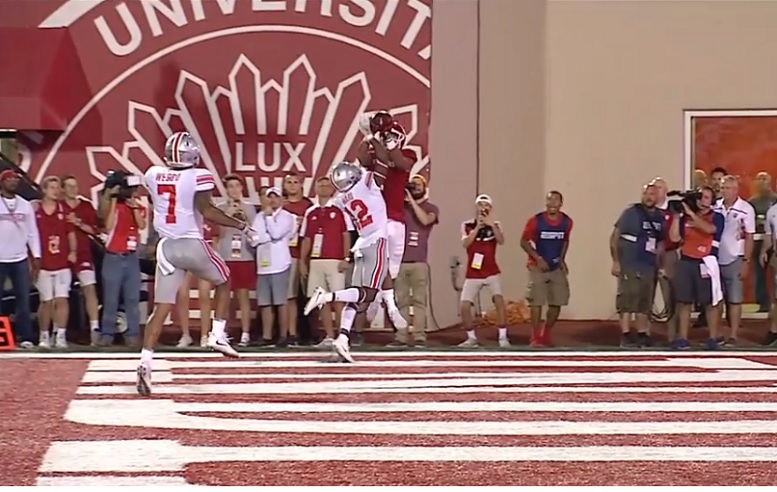 On a 2nd and 4 deep in Wisconsin territory, the Hoosiers offense lines up in a spread formation with Cobbs Jr at the top of your screen. #1 is lined up against a corner about two yards away with only a single high safety for perhaps some help. At the snap, the receiver runs down the sideline, hand-fighting on his way down, finds the ball in the air, then boxes out his coverage to grab the touchdown catch. This reception was with the defender draped all over him which shows Cobbs Jr’s physical side that created a little room, tracking it, and grabbing the ball while keeping his feet.

The Indiana offense is showing a 5 wide look facing a 3rd and 5 on the Maryland side of the field. #1 is uncovered at the line of scrimmage with a safety lined up 10 yards away (way too much room given). At the snap. Cobbs Jr. screams four yards past the yardmarker and turns around (expecting the ball). He works himself closer to the first down marker, making a contested catch with several defenders around him, then fights for more yardage. This shows knowledge of where he is on the field to make the play for a first down.

Facing off coverage on a 3rd and 15 play, #1 gets the target right after the snap as he runs three yards and turns around to try to run upfield. The small Buckeye corner, #8, wraps Cobbs Jr up and immediately brings him down like a cowboy ropes a steer. Without forward momentum, the bigger wideout was easily neutralized. This does not inspire confidence when much of the NFL game is about foot quickness.

On a 2nd and 8, Cobbs Jr. is lined up at the bottom of the screen against a corner within two yards of the receiver near the line of scrimmage. At the snap of the ball, #1 starts hand fighting with the corner and comes back to his quarterback’s throw to make the catch. While he makes the reception, the receiver gets no further yards. His inability to create separation makes him easy to bring down and neutralize.

Cobbs Jr is a big man at 6’ 4” 220 lbs, but unlike Martavis Bryant, he cannot run past or outjump his coverage. I see the former Hoosier as a decent red zone threat and possession receiver making him have some value as a team’s 4th or 5th receiver. He doesn’t have the quickness for special teams, so his upside is limited. If I am the Steelers, I take a hard pass on Cobbs Jr.