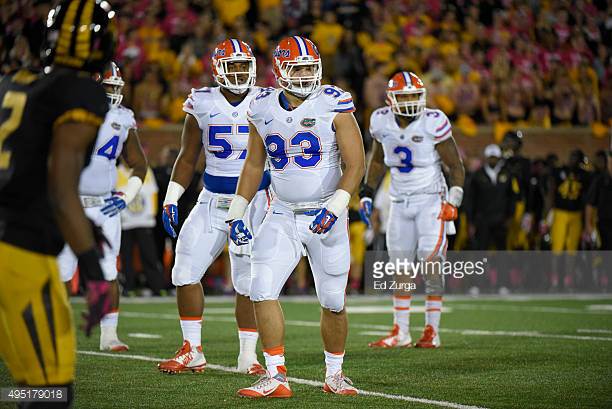 -Explosive get-off at the snap and gets upfield in a hurry
-Fast, violent hands that overpower linemen at point of attack
-Relentless motor that he pairs with impressive athleticism for position
-Low pad level with strong lower half
-Attacks gaps with speed, putting linemen on their heels quickly

-Lacks production despite strong traits
-Doesn’t have a feel for defending the run, largely because he worries about attacking gaps and getting upfield, leaving him vulnerable to misdirections
-One-year starter with limited experience for the position
-Inconsistent finisher
-Struggles to anchor against power run game

-Son of a former Navy SEAL
-Played in 36 career games over three seasons at Florida, recording 14 starts
-Finished career with 67 tackles, 10.5 tackles for loss, 5.5 sacks, and two forced fumbles
-Became first player in Gators’ history to come from Wyoming
-Recruited heavily as an offensive lineman, until Florida gave him a shot as a defensive lineman

Popping on the tape, it’s clear that Florida defensive tackle Taven Bryan is one of the more explosive defensive linemen in the 2018 NFL draft class. Most draft rankings will have him in the top 3-5 for the position, and rightfully so.

But that’s simply based on his traits, which he rarely paired with production, which is very important in the evaluation process.

Watching Bryan on tape, he flies off the ball and just an absolute monster with his hands and strength. It’s quite clear why evaluators love Bryan’s traits, but he’s going to be a major project, largely because he’s new to the position.

However, he’s certainly worth taking a shot on early, especially for defensive-line needy teams in the first round, like Dallas, Atlanta and New England.

Let’s take a look at some of those traits.

Look at the way Bryan gets off the ball, and has the athletic ability to track down Drew Lock on the read-option without wasting any movement.

That’s rare from a guy of his size, and position. He’s often the first guy off the ball, which puts offensive linemen in a bind quickly, since they can’t handle his combination of speed and strength.

He’s very solid here playing the run, and a show of the motor as well, but it’s rare that he’s able to play the run like this. He’ll flash it though, just like this.

Look at the way Bryan harnesses his get-off at the snap and reads the lineman across from him leaving, allowing Bryan to squeeze and replace in the gap. Once he does that, he’s able to stay square to the ball carrier and make the tackle for loss, which was rare for him throughout his Florida career.

Plays like this will certainly have defensive line coaches salivating over the opportunity to get their hands on him. With his traits, he could be molded into an elite defensive lineman, especially in a 4-3 alignment.

Bryan doesn’t have much in his arsenal as a pass rusher, as evidenced by his 5.5 sacks in 36 career games, but should he land in a good situation with a solid defensive coaching staff, he could take off, as both a run defender and a pass rusher.

With his get-off and strong hands? Good luck.

Check out the get-off here, first, but then look at his ability to run the arch. Yes, he wastes some time hand fighting with the guard, but with the proper coaching, that can get cleaned up.

He’s so strong throughout his body, and has a great work ethic. With the background that he has coming from Wyoming, and the athletic traits he has, I can see Bryan going in the 20-26 range at the end of the month.

While I completely disagree with the JJ Watt comparison right now, I could see Bryan becoming one of the top defensive linemen in the NFL under the right coaching.