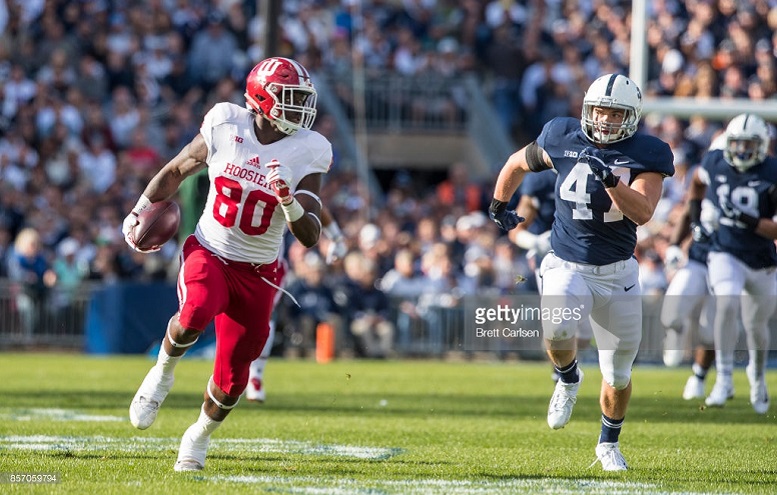 – Uses a nice stiff-arm
– Big lower body that generates power and speed
– Decent catch radius
– Learning as a blocker, more efficient out of slot
– Falls forward and tough to take to the ground
– Adjusts well to the ball in the air
– Lined up inline, in the slot, and as a wingback too

– Quite talented athletically, but very raw
– Rounds off routes and doesn’t run a full route tree
– Prefers to smash opponents vs. run around them
– Got banged up a lot with minor injuries his senior season
– Will be 22 in June

Split out wide on the three receiver side facing a third and 9, Thomas ducks inside his coverage at the snap. While it might have been some sort of zone coverage, it looks like a huge hole in the defense got exploited by Thomas as neither the safety or corner picks him up. This allows #80 to get free in the middle of the field. The tight end races down , adjusts to a poorly thrown low ball, and keeps on running only to get tripped up at the feet. Had the pass been made in stride, Thomas would have gotten an additional 25 yards at least and might have scored on that throw. This play shows off his ability to get loose and adjust to a poorly thrown pass.

Lined up in the wingback position on a second and 6, #80 keys on the outside pass rush at the snap. He widens his base and kicks his right foot back, getting his shoulders square, and ready to strike. Thomas engages the rusher, keeping his base wide, and arms inside. The tight end continues to guide the defender around the pocket until the pass is safely away. It was an awesome job pass blocking from the wingback spot!

In a four wide receiver formation with the Indiana offense facing a third and 6, #80 shows up ready to play. He races towards his corner, only to swat the smaller defender inside without breaking stride, races down the gridiron while tracking the ball well in the air over his inside shoulder, and makes the catch in stride making sure to secure the pigskin in the air closest to the sidelines. Thomas throws a stiff-arm and then drags a defender into the endzone for a 71-yard touchdown score. Sure it was the case of a Big 10 school beating up on the Sun Belt, but it was great to see Thomas in full stride racing down the field, determined to score.

Down big against the mighty Penn State, the Hoosier offense lines up five wide with Thomas in the slot. He runs towards his safety coverage, then cuts back making a one-handed grab while staring down two Nittany Lion defenders looking to smash him. #80 secures the pigskin and tries to spin away. The tight end is brought down quickly, but makes a great catch combined with good concentration.

Ian Thomas is a raw playmaker who could develop into a good tight end in a few years. With his recent draft hype and the status of current Steelers tight ends Vance McDonald and Jesse James injury-free, I don’t see Pittsburgh investing in him on either Day One or Day Two. The chances are that any team that wants him will need to grab him on Friday of the NFL Draft. There are bigger fish to fry in the Steeltown.