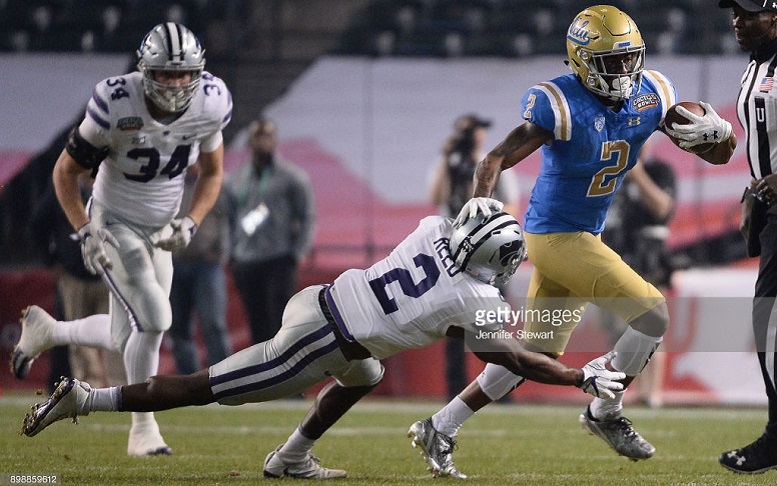 – Athletic, gets to top speed easily
– Smart, understands hot routes effectively
– Tracks the ball well, adjusts his body to put himself in best position to make the catch
– Explodes out of his breaks
– Has home run ability once the ball gets in his hand
– Powerful stiff arm
– Works his way back to the quarterback

– Hands need to be more consistent, drops flood his film
– Lacks physicality when fighting for contested throws
– Often outmuscled by cornerbacks on contested balls
– Needs to stay on the field, off-field issues are a concern

When he steps on to the field, UCLA wide receiver Jordan Lasley offers a lot of problems for opposing defensive backs. For starters, he’s fast enough to stretch the field as a deep threat but he’s also quick and agile enough to work the middle of the field. If you do not want to take my word for it, let the numbers speak for themselves. The UCLA receiver put up 1264 yards, 18.3 yards per catch and 9 touchdowns in just nine games. Averaging over 100 yards per game and almost 20 yards per catch, UCLA quarterback Josh Rosen found a lot of success getting the ball in the hands of his greatest playmaker.

If you’re going to give Lasley a cushion to work with, the wide receiver is going to take full advantage of it. An NFL caliber route above, he recognizes where the corner is and where the first down marker is located. Lasley runs a four-yard curl route at the marker, drawing in the Stanford cornerback who he easily side steps. From there, the UCLA receiver is able to tack on an additional 18 yards after the catch. His elusiveness and yards after the catch ability looks very similar to that of former Pittsburgh Steelers wide receiver Santonio Holmes.

Lasley is incredibly quick out of his breaks, watch as he is able to beat double coverage on the play above. The UCLA receiver explodes out of his slant route and is not only able to out run the Stanford cornerback who has over the top coverage but also safety Brandon Simmons who has underneath coverage. His speed and explosiveness gives Rosen a perfect window and opportunity to hit him in stride, which in return puts Lasley in another position to gain more yards after the catch.

Lasley is covered like a blanket on the above play but yet he manages to come down with one of the more incredible touchdowns of last season. The UCLA receivers get re-worked to the sideline but in a straight one on one battle, Rosen throws a jump ball to him. Lasley shows great concentration, vertical ability and body control as he is able to high point the football behind him and get two feet inbounds. He’ll have to get more consistent with his hands in press coverage but the UCLA is never out of a fight for a 50/50 ball. This is a big-league throw caught by a big-league receiver.

Under rated aspect of Lasley’s game is his smarts and ability to recognize how the defense is attacking. He checks into hot routes accordingly, putting the opposing defenses in check. Watch above as he recognizes the incoming cornerback blitz, points it out to Rosen and simply stands pat for his quarterback to deliver a strike. This smart recognition picks up quality yardage and also a first down. His football IQ is another aspect that will make Lasley’s transition to the pros that much easier.

One red flag that plagues Lasley’s on field performance is his bad cases of the drops. The receiver had one of the worst drop rates in college football last season as he just could not seem to consistently catch the football. The UCLA receiver will have to work on his focus and consistency should he wish to unlock his full potential. Perhaps a couple (dozen) sessions with the JUGS machine after practice will be required.

Earlier I mentioned that Lasley presents numerous problems for defenses when he steps on the field, and he has also presented numerous problems off the field as well. Only difference is, these problems are not hurting opposing defenses, only Lasley, himself. He was suspended for three games last season for a disciplinary matter and was arrested twice in 2016, one for possession of alcohol as a minor and the other for presenting a fake ID.

A bit of a silver lining came from the situation as UCLA coach Jim Mora spoke of Lasley returning from suspension a changed man. If that is the case, the UCLA product could be in store for big things at the next level. An explosive route runner who is always a threat to score with the ball in his hands, Lasley is one of the more intriguing mid round prospects in this year’s draft.

Games Watched: vs Kansas State, vs Memphis, vs Stanford, vs Arizona State, vs California