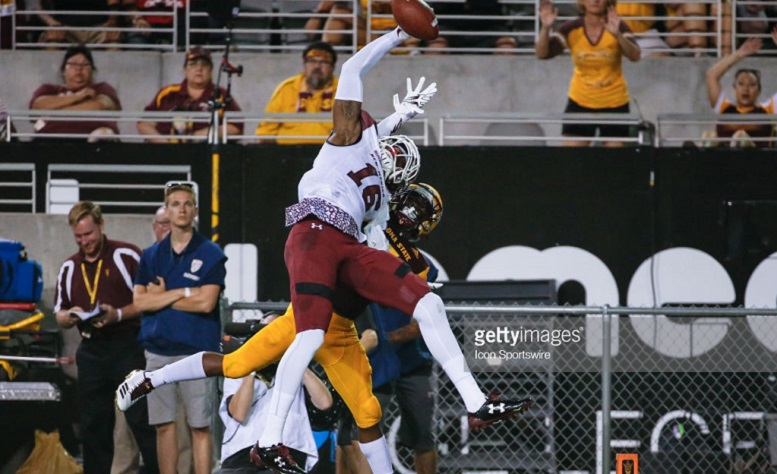 – Height puts him at a distinct advantage over opposing defensive backs
– Almost perfect at jump balls, uses height and vertical ability to high point the football
– Height gives him an unbelievable catch radius
– Adequate quickness at the top of his routes
– Good body control, readjusts accordingly in the air
– Consistently makes catches in traffic
– Improvises, works his way open when his initial route breaks down
– Willing blocker

– Sluggish, does not have elite speed
– Does not have speed needed to create separation on deep routes
– Offers little elusiveness in open field
– Stiff hips when running after the catch
– Could use frame better against press coverage

You’ve heard the story before. A small school prospect putting up monster numbers against lesser competition. He looks good on film but once again, it’s against lesser collegiate talent. Trying to decipher just how well the prospect will translate over to NFL competition is difficult. That analysis becomes a little bit easier when you are 6’5, 215 lbs, run a 4.56 40-yard dash and a 10’4” broad jump.

Some may already be familiar with Scott after his one-handed catch went viral. Now obviously, making one unbelievable catch has no correlation with a successful NFL career but there is a lot to like from a technical aspect above. Incredible focus, vertical ability and body control to go up, grab possession with one hand and then land in bounds. At his size, Scott is almost impossible target to defend in the red zone.

There’s been a lot of big, tall receivers who can outmuscle the opposing defensive backs. What makes Scott stand out is his ability to track the ball in the air and consistently put himself in the best position to make the grab. Nothing more than a desperation heave that is a bit behind him, the New Mexico State receiver is able to bail out his quarterback, turning backwards, cradling the football and tapping his feet in bounds for the impressive catch.

Here’s something you might not expect out a player of Scott’s size – the suddenness at the top of his route. He runs square, gives a three-step turnaround on his curl and then drifts to sideline to give his quarterback a window where only he can catch the football. One element you can’t see on this play but is important to note is that New Mexico State was facing a 3rd and 12 and Scott’s break came right at the marker, enough to convert the first down.

Scott is not just a red zone target, there is more to his overall game to be admired. For starters, he’s versatile, he’s lined up outside and in the slot. On the above play, he’s lined up outside and his improvisation helps his team move down field. Just a smart play from the New Mexico State receiver as he realizes a defender is shading into his curl route. From there, he works his way back inside and finds a large opening in the middle of the field. Never one to take a play off, Scott shows a consistent feel for always working his way back to the quarterback and open field when his initial route breaks down.

Got to love the effort from Scott above. Facing physical press coverage, he keeps working inside and is able to reel in a very contested grab. Due to his stature, he has the ability to hold off physical corners when the ball is in the air.

While Scott was able to make the catch above, there a few notable flaws in his game. He does not get enough separation with his lateral footwork at the release, leaving him with little room to work with. And for a receiver his size, you would expect more physicality out of his route running. His hand work really lacks but would only be an added bonus to his size if he can add a subtle push off to his game.

The New Mexico State receiver also gets little separation on his vertical routes as a cornerback is always tied to his hip (look back at the second play featured). While he’s not known for a receiver who will blow by a defense, Scott is going to have to do a better job to gain separation vertically at the next level.

While Scott is a small school prospect, I do not think he will have too hard of a time transitioning to the pros. Some of his best games came against Arizona State and Arkansas, showing he can get it done against better competition. With an unreal catch radius, size and mismatch ability, Scott has some intriguing tools to offer at the next level.

Games Watched: vs Arizona State, vs Texas State, vs Arkansas, vs Troy, vs Utah State