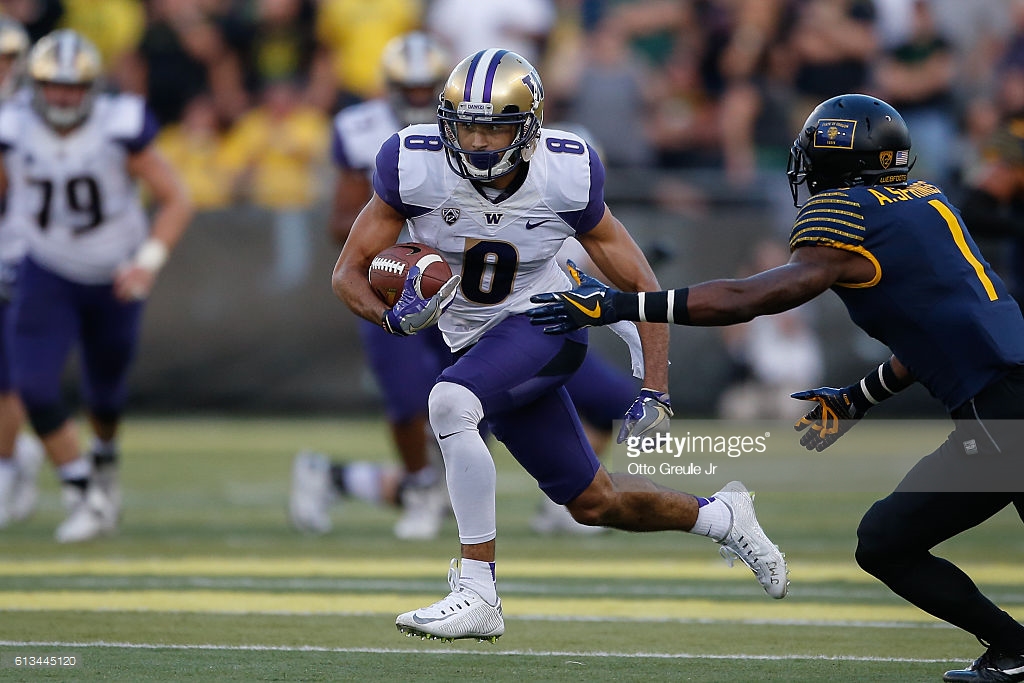 -Rail-thin frame that struggles to hold up against punishment throughout duration of season
-Physical corners tend to throw him off of his game
-Will go stretches with limited production
-Lacks adequate play strength at times
-Seems hesitant to go across the middle on in-breaking routes
-Willing blocker, but lacks technique and power

One of the more underrated receiver’s in the 2018 NFL draft class has to be Washington’s Dante Pettis, who routinely set the field afire as a receiver and punt returner, yet due to being on the West Coast, seems to have been forgotten about in the discussion of some of the top receivers heading into the draft later this month.

As a returner, Pettis simply set the NCAA’s all-time mark for returns for a score with nine, while also hauling in 163 career passes for 2,256 yards and 24 touchdowns, good for top five in program history for the Huskies.

Although not as fast or as tall as some of the other receivers in this class, Pettis might be one of the most refined, in terms of route running and ball skills. In fact, Pettis has some great fluidity to his lower half, adding in some impressive explosiveness to his lower half for a guy of his size and stride length.

As a route runner, he has a great feel for what corners are trying to do against him, and he’s able to sink his hips quickly to get in and out of cuts with efficiency, while throwing in a number of strong head fakes to get corners to bite.

Here against Oregon in 2016, Pettis eats up the ground between him and the Ducks’ corner quickly. Once he’s where he wants to be off the line, Pettis sinks his hips quickly and throws in a head fake for good measure, getting the cornerback to bite. Once the corner engages forward, Pettis slips past him with ease on the stop-and-go, resulting in one of the easiest touchdowns he’ll ever score.

I see a lot of Michael Thomas of the New Orleans Saints when watching Pettis, thanks to his route running and ability to make plays outside of his frame, due to his wide catch radius.

This is one of the better touchdown catches you’ll see from a college wide receiver.

At the snap, Pettis shakes free off the line with a jab step inside, forcing the corner to commit on the slant. Once that happens, Pettis is able to slip up the field to the outside, going all-out to haul in this touchdown with one hand.

That’s full extension; I absolutely love that mentality from a receiver to try and get every single football in their vicinity.

Aside from having great hands, Pettis is a master at making adjustments on deep balls when they’re in the air. Oftentimes, Pettis was bailing out Jake Browning on deep throws the last few seasons, helping the Huskies put up monster offensive numbers.

This deep ball to Pettis against Washington State in 2016 is late and underthrown, but look at the way Pettis not only adjusts in the air to make the catch, but also fends off the Cougars’ defensive back, leading to a highlight-reel touchdown.

Aside from maybe Michael Gallup, Pettis is one of the best deep ball trackers and adjusters in this draft class. It’s a hard thing to do for a receiver, but Pettis and Gallup both do it with ease.

When coming off the line, Pettis appears to glide at times, which gives corners fits with timing and anticipation. He has such long stride lengths and seems to hover of the turf, getting on top of the corner quickly.

He doesn’t appear to be a burner on tape, but when he’s even with a corner off the line, chances are he’s going to get behind them for a splash play.

Against Cal in 2016, Pettis explodes off the line with limited movement, getting on top of the corner quickly. Once he’s on top of him, a jab to the outside and explosion up the field allows Pettis to coast for the home run ball, giving the Huskies another easy score.

He just makes it look so darn easy at times; it’s weird that he isn’t getting proper love from draftniks.

Yes, he’s got a rail thin frame, and he can be overpowered at times, but with an ability to run routes the way he does, and bring an explosive element to special teams, Pettis should be a sure-fire Day 2 pick, who immediately steps into a team and excels.