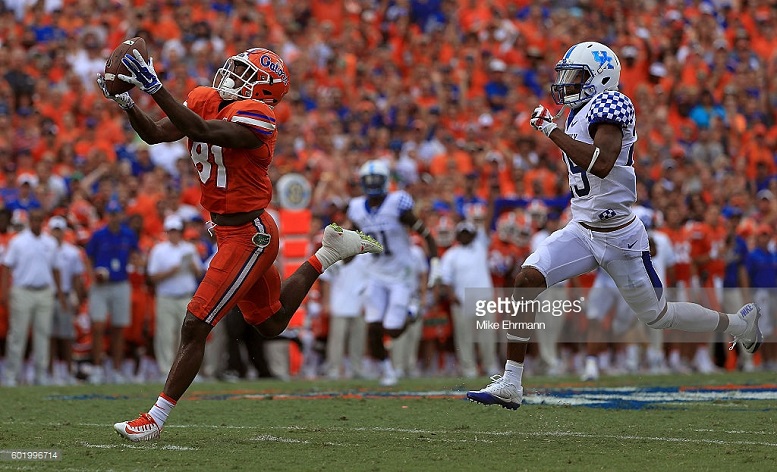 – Creates separation with exceptional footwork (e.g. inside jab step)
– Has long speed to blow by defensive backs and be a deep threat
– Hard to find a more athletic receiver
– Dangerous with the ball in his hand
– Creates an uncontested release at line of scrimmage with quick feet
– Kick and punt return weapon

– Struggles with drops, hands are a inconsistent
– Relies solely on footwork to beat press, could be more physical with hands
– Numerous off the field concerns
– Missed all of 2017 after being suspended

Florida wide receiver Antonio Callaway certainly is a complex prospect to understand. On the field, the wide receiver is perhaps one of the most athletically gifted receivers in this year’s draft. His speed, quickness and raw athleticism make him a natural playmaker on the field. Off the field is a different story, as Callaway has a detailed history of running into trouble off the gridiron.

Though he spent all of 2017 suspended, Callaway still has done enough in his limited body of work to garner attention from NFL analysts and players. One of those players who have drawn close comparisons is Steelers wide receiver Antonio Brown. Their lethal route running and playmaking ability has been the catalyst for the comparisons, and Brown has noticed, even mentioning Callaway in a tweet.

Callaway lined up far right, uses his trademark footwork to open FSU cornerback Tarvarus McFadden’s hips. That slight outside jab by Callaway opens up McFadden and gives the receiver an uncontested release into his slant route. His footwork also allows a brief second of hesitation, giving him the separation he needs to open a window for the quarterback to hit him. McFadden is being regarded as a day two cornerback, though he is not the only big-name cornerback to be abused by Callaway’s route running ability.

To be the best, you have to beat the best. Here’s Callaway embarrassing top safety prospect Minkah Fitzpatrick in the 2016 SEC Title Game. In the slot, the Florida receiver runs towards Fitzpatrick, once again giving a brief pivot with his inside foot. This is enough to freeze Fitzpatrick, and gives Callaway the opportunity to blow away on his corner route. Getting beat already puts you in a less than favorable position but try recovering against 4.4 speed, which Callaway flashed at the combine. That’s what makes the Florida receiver so dangerous, his athleticism works together with his route running, giving defensive backs no margin for error.

Callaway’s tools and footwork make him the ultimate money ball shot for his offense. Watch him perfectly execute this out and up against Georgia, using his feet and head perfectly to bait the Georgia defensive back. As he runs the out, he turns his head back to the quarterback and then in a flash turns upfield. Once again, Callaway has put a defensive back in a position to recover rather than defend. It is easy to see why with his double moves, short area quickness and smooth route running that he has drawn comparisons to players such as Brown.

Another double move and another catch on the play above. This time it’s a stop and go, with Callaway simply outrunning the Tennessee cornerback after the selling the comeback route. The ball is a bit underthrown as the Florida receiver has to slow down for a moment, allowing the cornerback to catch up and contest the catch. But here’s where Callaway really shines bright, showing incredible concentration and focus to catch the ball over his shoulder and keep his feet in bounds.

One phase where Callaway separates from the quick receiver mold like Brown, is with the long ball. The Florida wide out is a legitimate deep threat with his 4.4 speed as he can take the top off a defense. Think more Martavis Bryant like here as the natural athleticism is too much to keep up with. On the play above, Callaway runs a post route right through the Kentucky defense, creating about 2-3 yards of separation at the catch.

There is not much to dislike about Callaway on the field but if there’s one focus of his game that he must improve it is his consistency catching the football. There are times where he reels in unbelievable grabs like the stop and no go route above and then there are other times where he just downright drops the ball. That’s shown above, Callaway is running a curl route and all is going well, he plants, gives a subtle push off creating separation and then he drops the ball. He also dropped a catchable ball at the Florida Gators pro day here.

The elephant in the room is Callaway’s off the field issues. Every year at Florida, he has been involved in an off-field issue starting with a marijuana citation and culminating in a 2017 suspension for credit card fraud. He’s going to have to convince teams that he has changed and that all that is behind him. If Callaway can stay on the field, there is no telling where his ceiling is. In my eyes, this is a player who would have likely been a first round pick had he not missed all of 2017. Should Callaway leave his off-field issues in the past, the team that selects him is selecting a potential superstar in the making.