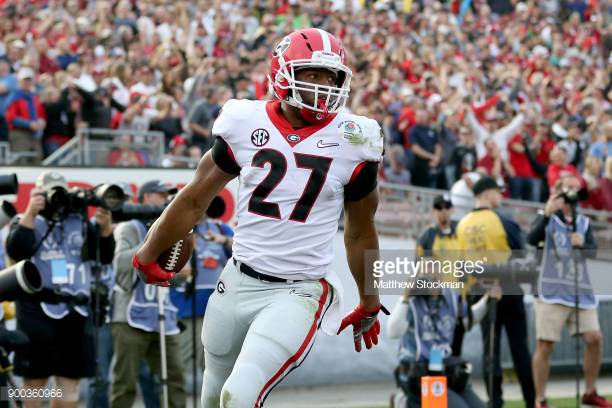 – Runs behind his pads to deliver hits on defenders
– Finds cutback lane well and uses lateral jump cuts
– Quite patient, letting play develop
– Nature center of gravity, rarely off-balance which helps him break tackles
– Quick feet with a short burst
– Lost 5 out of 8 fumbles in first 3 years with no fumbles his senior year
– Runs where play is designed to run (doesn’t naturally bounce outside)
– Keeps legs churning

– Suffered serious knee injury sophomore year (left ACL intact)
– Not as explosive/fast as he was before the injury happened in 2015
– Needs to build up speed
– Rarely used in passing game due to emergence of Sony Michel, when used he was very inconsistent pass blocking
– Sometimes his patience with his adequate vision allows defenses to close holes quicker than the runner anticipates
– Will turn 23 in December

– 247Sports 5-star prospect and a 4-star prospect for Rivals, Scout, and ESPN
– Second all-time Georgia Bulldogs leading rusher (only Herschel Walker has more)
– Had 24 collegiate games with 100 yards rushing and 3 games with 200+ rushing yards
– Played in 47 college games, finishing with 758 rushes for 4,769 yards and 44 touchdowns, caught 31 passes for 361 yards with 4 receiving touchdowns (18 receptions his freshman year)
– As a high school Cedartown senior, he ran for 2,690 yards and 41 touchdowns

Due to the change of explosiveness that was caused by Chubb’s knee injury suffered in 2015, I will be showing gifs from 2015-2017. He may never return to his pre-injury form; however the young runner might:

On a second and 5 lined up in the I-formation, #27 reads his blockers as he receives the handoff. Chubb explodes into the heart of the line of scrimmage, running under his pads, keeping his legs churning while fighting through two members of the Crimson Tide that looked like they had him wrapped up. He breaks those tackles, and then gets a little daylight only to be gang tackled by four Alabama defenders. It was his leg drive, balance, and explosion that turned a scripted 4 yard gain into a 17 yarder.

Lined up behind his quarterback in the shotgun on a second and 10, Chubb takes the pitch and starts breaking the run outside. His feet are less bouncy than in the 2015 Alabama game. The runner gets a little tangled up in the pile on the outside and ends up diving for a 2 yard gain. He seems to be running hard, but his quickness/explosion isn’t as pronounced. It takes time to heal and Chubb certainly wasn’t at his best in 2016.

Faced with a second and goal at the 7-yard line, Chubb lines up behind his fullback facing a strong defensive front against the run. #27 takes two steps outside to receive the pitch and reads his left offensive tackle’s block to cut slightly back inside. He runs towards the heart of the defense, then jump cuts outside, hurdles a defender, and gallops his way into the endzone. It was a combination of patience, balance, lateral agility, and speed that created that score.

On a first and 10 in a single back formation, #27 steps forward towards his quarterback, but does not sell the fake handoff. Chubb is off balance and out of position to pass block for his signal caller. His effort just gave him a front row seat to watch #11 get smashed. A more aggressive attitude and stance could have bought Fromm more time back there. If he doesn’t get more comfortable and improve his pass blocking, his usage could tip off NFL defenses.

Nick Chubb pre-injury is significantly better than Saquon Barkley in 2015. Post-injury Chubb in 2016 was a work in progress and in 2017, #27 certainly improved his explosiveness. If the runner continues to improve, then a Day Two selection is a steal; however it is going to take time to see if the back can get there. The Steelers already have a young runner coming off injury in James Conner, do they bite? Chubb also has the patience that Le’Veon Bell has shown, but is so much more limited in the passing game. While I like his game and wish him success, I do not believe that the former Bulldog is the runner Pittsburgh is looking for in the 2018 NFL Draft.