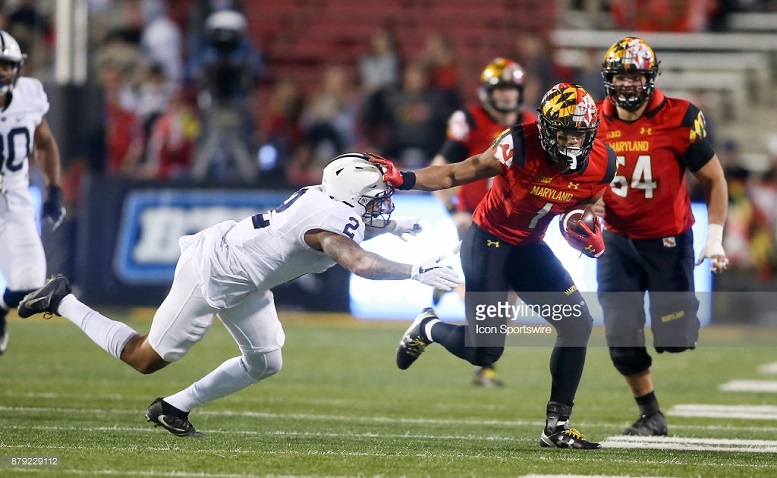 – Great straight-line speed as evidenced by 4.42 40-yard dash time
– Athletically superior talent, ranked top of combine in majority of drills
– Can go up and attack the football at the highest point
– Works his way back to the quarterback
– Disciplined route runner, can sell a double move
– Has physical tools to separate on comeback, curl routes
– Agile, has yards after the catch ability
– Speed to separate on deep routes

Born in the city of Brotherly Love, Maryland wide receiver D.J. Moore is certainly attracting a lot of love heading into this year’s NFL Draft. Moore has compiled the perfect recipe for his rising draft stock – that is a great final season, in which he nabbed 80 receptions for over 1000 yards and a killer combine performance.

His athletic traits were full on display at the Combine, where he put up numbers that ranked highest among his position group. Moore’s 4.42 40-yard dash time was among the best and his 11’’ broad jump was highest among all receivers. Those numbers are not just measurables either, as his speed, quickness and receiving ability shine throughout his tape.

Moore’s speed and quickness make him a lethal route runner. The wide receiver stays square, before cutting out and up. Note how the corner back is defending the outside, giving Moore the inside but the Maryland wide receiver is just too quick, winning with an outside route anyways. Once he is able to turn the cornerback’s hips, there is no chance he is going to keep up with Moore upfield. There he is able to show nice separation at the top of his route, drifting away from the cornerback, giving him enough space to secure the catch.

If you give Moore space to run, he’s likely going to burn you. So naturally, against a 6-foot-tall 210-pound wide receiver, your best bet is to press and jam him during his route. Except for one problem – Moore is strong enough and has the footwork required to beat press coverage. Watch above as he uses his combative hands to battle the press and then is able to use his feet and leverage (perhaps a subtle shove too), to give him the separation he needs to make the catch.

Here is that 4.42 speed in action. Moore is able to quickly get into his second gear with speed quick enough to take the top off the defense. His speed gives him able amount of room to blow past the cornerback and gives him a lane to catch the football. The Maryland wide receiver also shows impressive focus and hands as he is able to reel in the pass over his shoulder with one hand. This catch looks eerily similar to some of the ones we have seen Antonio Brown pull off in recent years.

Not only is Moore a threat to take the top off a defense but he is also elusive enough to be an underneath threat. Here, he can use his elusiveness to create yards after the catch. The wide receiver is incredibly slippery and best reminds me of Golden Tate. Moore can be used in a variety of ways, whether it be as an underneath threat, deep threat or even as a fade route option in the endzone and still produce. This versatility is a characteristic that makes him desirable to many NFL teams.

Moore’s biggest downfall is that he lacks that consistent burst or effort out of his routes. On the above play, he fails to show any burst or explosiveness out of his route and it is an easy play for the defensive back to break up. Also, many of his receptions were the product of Maryland feeding the ball to its best playmaker, at the next level, Moore will have to show more options out of his route tree in order to unlock his full potential.

With that all being said, Moore is shaping up to be one of the fastest rising receiving prospects in this year’s draft. He’s got all the tools – speed, quickness, combative hands, and concentration to become an elite receiver. Moore may be high on some current draft boards but his ceiling is even higher.

Games Watched: vs Wisconsin, vs Michigan, vs Penn State, vs Indiana, vs Ohio State