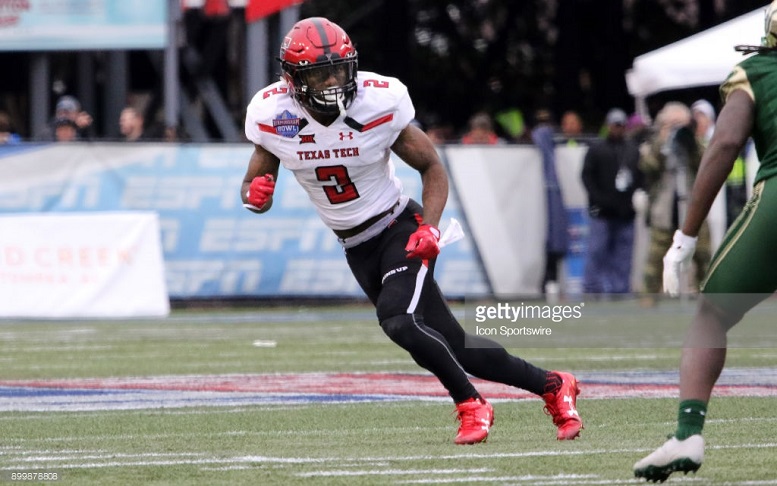 – Nice timed speed of 4.43 in a 40 yard dash and might be even faster on deep routes
– Usually demands bracket coverage with his ability to take ordinary routes the distance
– Willing receiver in the middle of the field
– Adjusts well to the ball in the air
– Creates separation from his coverage
– Good punt returner that could make an immediate impact
– Developed spin move combined with bouncy feet and loose hips
– Cut back runner

– Gets knocked around by more physical coverage (rarely faced it in slot)
– Doesn’t win many contested throws
– Usually goes down easily after being touched
– Did the Texas Tech scheme create him?
– Varied effort while run blocking

– Named a four star prospect by Scout, and a three star prospect by Rivals and 247Sports
– Named All-Big 12 second team honoree by coaches and Associated Press
– Finished second all time in Texas Tech receiving yards to Michael Crabtree
– Was a semifinalist for the Biletnikoff Award and the Earl Campbell Tyler Rose Award
– Played in 38 collegiate games: finishing with 159 receptions for 2,424 receiving yards for 17 touchdowns, ran 8 times for 17 rushing yards and a touchdown, returned 16 kickoffs for 412 yards and a touchdown, and also returned a punt for 14 yards
– Wore both #2 and #20 at Texas Tech

On a second and 5 in the red zone, #2 lines up in the slot and initially fakes the wide receiver sweep to the opposite side. He pivots around back into the flat, catching the ball in stride, starts weaving between defenders like a downhill skier goes between flags, ducks a high tackling headhunter, and fights his way to the 4 yard line. Coutee shows off his quick feet, balance, in-space explosion, and vision on that bubble screen.

Lined up again in the slot, Coutee explodes off the line at the snap. The defensive back in coverage gets there too late and the young receiver makes him pay. #2 races downfield untouched, tracking the ball well in the air, catching the pigskin in stride, and then glides his way into the endzone for a 77 yard score. His ability to find the ball in the air 40 yards downfield and not break stride is the story here, not the broken coverage.

Coutee is on the line of scrimmage for the first play of the second half. At the snap, he races down in an attempt to block on the near sideline bubble screen. The defender he was assigned to block, ducked underneath the receiver and #20 just gives up on the play. The wideout allows other defenders to pile on his teammate. Sure Coutee mixed the block, but he needs to keep going until the whistle and try to protect a fellow receiver.

Faced with a second and 20, #20 lines up in the slot. At the snap, he fakes a deep pattern, only to turn around at three yards. This creates a bubble until the safety comes in to attempt to make the tackle; Coutee slips past him and finds his second gear racing down the sidelines. The receiver gets a nice block downfield, makes a good cut inside for the 37 yard touchdown pitch and catch. By knowing the angles and reading his blocks, the young receiver took a 10 yard gain and created a longer touchdown!

Coutee looks more like a running back with the ball in his hands than a receiver, darting and weaving around. He isn’t a very physical player and doesn’t give consistent effort when the young receiver doesn’t have the ball in his own hands. The former Texas Tech receiver could help out the Steelers much like Eli Rogers did before him, perhaps even in the return game to give Antonio Brown a break there. The question is will Pittsburgh be willing to play the more premium price for him? Of that, I am not so sure.