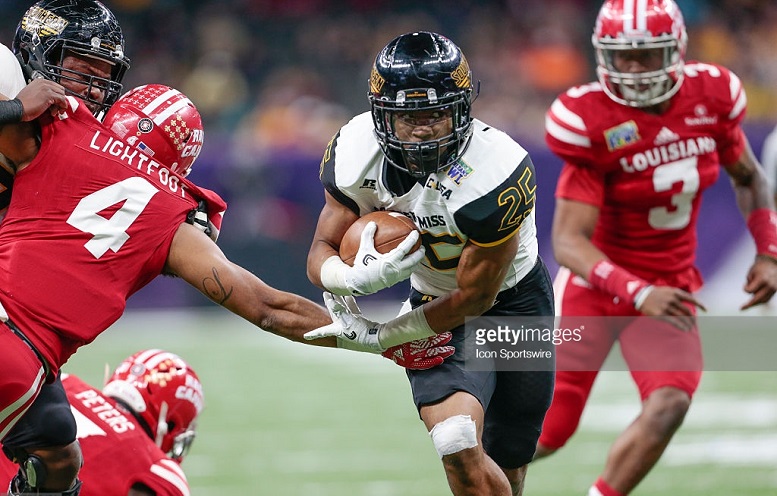 On a desperate fourth down and 5 with only five seconds left in the first half, Smith is lined up beside his quarterback in the shotgun. At the snap, the runner steps up but does not find a defender to block, so he slips into the flat. The signal caller tosses a soft ball and the back immediately accelerates inside, then when a defender steps up, the playmaker jump cuts outside. On this run, Smith makes several defenders miss out in the open field, before being brought down. It’s all about his quick feet and loose hips with the right amount of acceleration in the open field.

Lined up a yard to the left of the signal caller in a spread formation facing a first and 10, #25 gets the delayed handoff and does a great job of reading his blockers. The back starts and stops allowing for the offensive line to engage the Kentucky front seven. A Wildcat defender tries to tackle Smith high and the runner spun out of the attempt. This does allow the rest of the defense to swarm him to bring him down. The play got blocked for two yards; however the playmaker ran it for six yards.

Faced with a second and 5, the Southern Mississippi offense is spread out with Smith a yard to the left of the quarterback. At the snap of the ball, #25 gets the handoff and is a bit too patient which allows a defensive lineman who got good leverage against his blocker to bring down the runner with one arm for a one yard gain. The back needed to use his jump cut immediately to get outside as there was no crease developed on the line of scrimmage.

In the redzone, Smith is lined up near his signal caller in a spread formation. He gets the delayed handoff, accelerates, changes directions while sinking his hips, makes several defenders miss in space, keeps his balance while racing into the end zone. It’s his Sonic the Hedgehog (Sega video game when I was a kid) moves that make him a dangerous runner.

Beside his quarterback in shotgun, #25 steps forward at the snap. He attacks the defender who crosses his face towards the pocket. Smith keeps his ground, but allows the defender to get his arms up as the pigskin is thrown. The ball fell incomplete; however I liked the back’s initial pass blocking effort, including his balance. The young playmaker will need to work on his technique at the next level as effort is never enough in the NFL.

Ito Smith is a nice change of pace back, who might develop into a Jamaal Charles (former Chief and Bronco) type of back or who could be similar to James White (current pass catching Patriots back). I see him as a nice second string back to team up with James Conner if the Steelers elect to let Le’Veon Bell go after this season. The former Golden Eagle has quick feet, nice vision and balance with an amazing jump cut. He doesn’t protect the ball or himself as well as he should, which gives me a little cause for concern. The Southern Mississippi program is not an outstanding haven for NFL type coaching or talent, so it may take some time for him to develop. With a lighter investment than a Derrius Guice or Sonny Michel would take, it might be wise for the Steelers to take a chance with this talented runner.