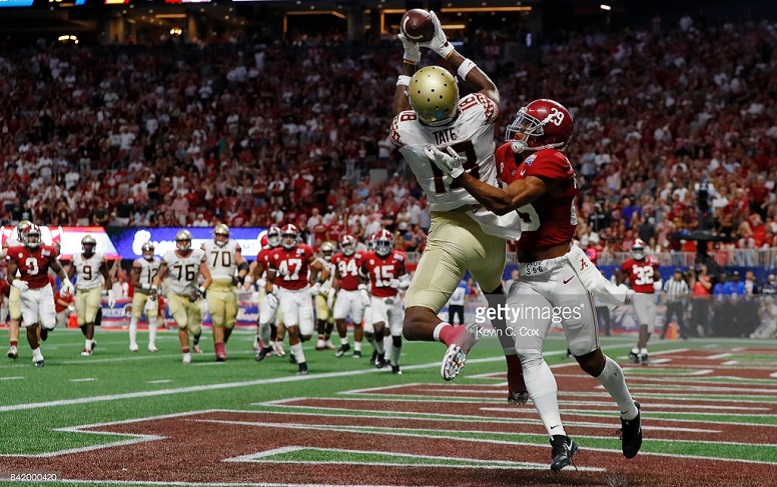 – Slow, sluggish release off the line of scrimmage
– Does not have the speed to beat his man deep
– Won’t create much separation or window for the ball
– Won’t see as much off coverage at the next level

You don’t have to look far to find an NFL comparison for Florida wide receiver Auden Tate, in fact you don’t even have to leave his alma mater. That’s because he is almost an identical replica to former FSU wide receiver and current Bills receiver Kelvin Benjamin.

Tate is built almost identically to Benjamin as both receivers are 6’5 and over 225 lbs. Not only that, but he plays in a physical style like Benjamin. The Florida State wide receiver is certainly not the fastest player on the field (4.68 40-yard dash time is a testament of that) but he uses his frame to outmuscle defensive backs in order to be a threat.

Watch Tate go up and outmuscle Alabama defensive back Minkah Fitzpatrick on the touchdown above. Fitzpatrick is no slouch either as he is regarded as arguably the top safety prospect in this year’s draft. The Florida State wide receiver simply outmuscles Fitzpatrick as his gigantic frame is too much to handle, he then high points the football and comes down with an easy touchdown. Tate scored 10 touchdowns in his last season and with his size, he will undoubtedly be a red zone threat at the next level.

I do not believe it is possible to over throw Tate, as his 6’5 height and incredible leaping ability make almost any ball over his head catchable. The receiver consistently high points the football and can snag any pass thrown over his head and this ability will make him a quarterback’s best friend. Tate shows that on the play above but that’s not all, check out the incredible body control and concentration to keep his feet in bound. What makes his body control so remarkable is that it is typically not seen for a player his size.

Quarterbacks trust Tate and for good reason. They know that at his size, the wide receiver is simply too physical to get out worked for a ball. What is a 50/50 ball, becomes a 80/20 ball in Tate’s favor when thrown in his direction. The above ball has no business being thrown, as the Florida cornerback has textbook coverage but it is that trust quarterbacks have that their 6’5, 228 lb receiver will win the battle that results in the pass.

Football is a game of odds and tendencies. Odds are that when it comes to Tate and a shorter defensive back, it will be Tate who comes down with the catch. His large catch radius and height remind me of former AFC North receivers such as Plaxico Burress and Braylon Edwards.

That is except for a few notable differences.

While in their prime, Buress and Edwards had enough long speed to be creditable deep threats, Tate struggles with acceleration and speed. His 4.68 40-yard dash just about spooked the whole NFL draft community and game tap confirms this fear. Tate lacks burst off the line and as a result you will not see him blow past any cornerbacks at the line of scrimmage. Instead you will see a sluggish start and inability to catch up to the throw.

Here we see Tate’s lack of long speed again except this time the cornerback is in off coverage rather than press. This too presents a challenge as while he will never win in a one on one-foot race, the Florida State receiver will definitely never win if his coverage has a cushion to work with.

Due to his lack of speed, Tate is going to struggle to create separation, a problem that will only be magnified at the NFL level. He’ll have to sell teams on his ability to be a physical mismatch and red zone threat. The question is just how much value is there for receivers like Tate in the NFL. The Panthers selected Benjamin in the first round four years ago and he has been unable to replicate his rookie season, regressing every season since. Benjamin found himself out of a role and out of Carolina, being traded to the Bill last season, scoring just three touchdowns.

Athleticism is the name of the game and Tate lacks that pure athleticism that makes him a valuable asset. With no yards after the catch ability and lack of separation on his routes, Tate may have value in a situational role but his ceiling remains fairly low.

Games Watched: vs Florida, vs Clemson, vs Southern Miss, vs Clemson (2016)