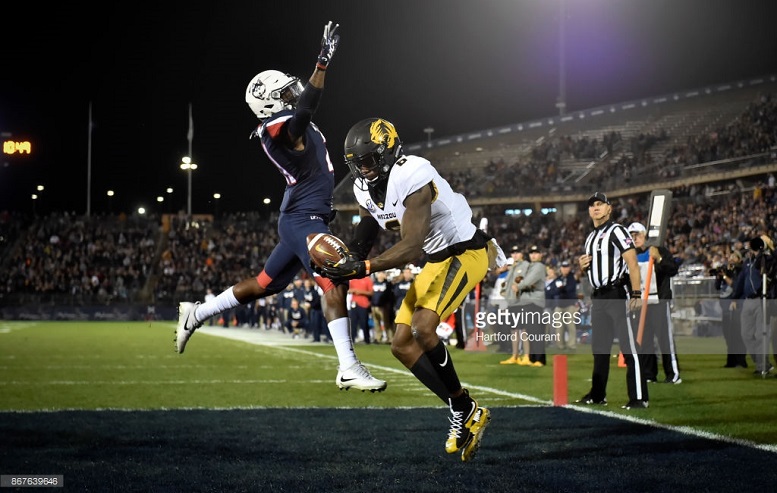 -Slight hitch in his release off the line, leading to struggles against press coverage
-Rarely moved around the offense, lined up exclusively on the left side of offense at the X
-Limited route tree that featured a number of hitches and comebacks
-Very rarely works towards the middle of the field, pure boundary guy
-Lacks deception at the top of his routes

-Chose Missouri over a number of power 5 programs, headlined by Southern California and Oklahoma State
-Joined former Missouri wideout Jeremy Maclin as only other WR in program history with back-to-back 1,000-yard seasons
-Recorded 4.6 40-yard dash at Combine, and had a 38.0-inch vertical
-Earned 2017 Second Team All-SEC honors for Tigers

Standing 6-feet-3, Moore certainly looks the part of a game-breaking receiver, but he has a limited route tree that he worked with at Missouri, and struggled with focus drops at times over the last two seasons.

However, once he gets the ball in his hands, he’s a major problem for defenses, thanks to his game-breaking speed and his underrated power for his build. Defensive backs truly aren’t much of a match for him when he turns into a runner after the catch.

The clip above is from a game at UConn during the 2017 season. Not only does he shrug off the first tackle attempt with ease, he throws the second defender to the ground with a mean stiff arm, allowing him to pick up additional yardage.

Aside from being a strong runner after the catch with some serious power, Moore flashed his athletic traits quite a bit for the Tigers.

Allowed a free release off the line here against Kentucky, due to zone coverage, Moore runs right past the squatting cornerback. Once he’s even with the corner, he knows he has the secondary burnt for a touchdown.

Watch him throw his hands up to call for the ball from Lock. Once the ball is in his hands on the go route, he’s a blur in the open field. While he didn’t test as well as he should have at the combine — testing in the 17th percentile in the 40, according to mockdraftable.com — he still has impressive physical traits to work with.

As I mentioned earlier, he has a limited route tree, but he did flash the ability to be technical in his routes, while getting in and out of his breaks quickly when working outside of hitches and comebacks.

Look at the fluidity in the route here, and the precision with his cuts. He absolutely toasts the Auburn cornerback here for the touchdown.

Head fakes and explosive cuts open up this scoring strike for him, but the technicality with the timing on his cuts is pretty impressive. He runs this with ease, which makes me question why Missouri didn’t open up the route tree for him more often.

Aside from this touchdown catch against Auburn, I came away very impressed with Moore’s makeup in this game. Against the Tigers, Moore served primarily as a blocker for the first three-and-a-half quarters in a blowout loss.

Instead of getting frustrated and showing his displeasure, Moore worked his tail off as a blocker, and was rewarded late in the game. I love that in a receiver, especially in today’s age where receivers seem to all be me-first guys. Moore is a fresh change of pace.

Overall, I came away very pleased with Moore’s tape, and could see him carving out a long, successful career as a boundary receiver in the NFL, who thrives after the catch. He’ll block his butt off, and look to run through a wall for whichever coaching staff he lands under. That’s a great starting position for a rookie receiver coming out of a program that isn’t known for producing consistent NFL talent at receiver.