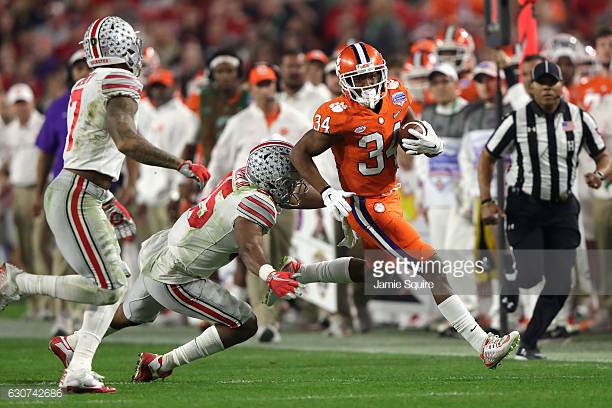 -Slow, labored movement
-Lacks agility in coverage, struggles in man and zone
-Fooled often by play-action fakes
-Lacks bend in his knees and plays with a high pad level
-Struggles to sift through traffic to find ball carrier

-Played in 50 career games (24 starts) over four seasons in Columbus
-Finished career with 154 tackles, 11 tackles for loss, and six pass breakups
-Team Captain for the Buckeyes
-Graduated with a degree in communications
-Invited to East-West Shrine Game
-Honorable Mention Big Ten in 2016 and 2017

Not many linebackers coming out of college has as much game experience as Ohio State’s Chris Worley has this year coming out of the Buckeyes’ program under the watchful eye of Urban Meyer.

While Worley started just 24 games in his four years in Columbus, Worley was often the first linebacker off the bench in certain situations for Ohio State, providing him not only with valuable experience, but versatility to take to the next level.

Despite having that experience and versatility, Worley doesn’t appear to be a fit as a three-down linebacker in the NFL, largely due to his lack of athleticism, and his inability to cover, whether in man or zone.

However, where Worley excels at is coming downhill with force against the run.

On the road against Indiana to open the 2017 season, Worley had a strong game against the run, often meeting running backs right in the hole with serious force. With his heels on his own goal-line here, Worley comes shooting through the gap to make the stick in the hole, keeping the Hoosiers’ running back out of the end zone.

Plays like that were prevalent throughout Worley’s tape over the last two seasons worth of games I watched. He’s so darn good against the run, often coming through with sound stops.

Against the Oklahoma Sooners at The Horseshoe in Columbus, Worley lowered the boom early and often against the Sooners’ ground game, forcing Oklahoma to turn to Baker Mayfield and the passing game to come away with the win in Columbus.

Here against the Sooners, Worley does a nice job of sliding over into his gap, and striking the Sooners’ running back with serious force, causing a fumble that the Buckeyes recovered.

But when he was asked to drop into coverage, whether that was in man or zone, Worley was woeful to watch, largely because he doesn’t have the change of direction skills, nor the long speed and agility to keep up with running backs and tight ends down the field.

Once again against Indiana here, Worley draws the assignment of the Hoosiers’ slot receiver. You can see in the clip above that the Indiana receiver gives Worley a shake in the open field, allowing him to break free with ease.

Worley doesn’t move well in space as a defender of the pass. He’s flat-footed and very heavy on his feet in these instances, and its’ abundantly clear on film that he’s more than uncomfortable.

I believe that Worley can latch onto an NFL roster and stick around for awhile, especially as a special teams demon. He’s not afraid to throw his body around, and he’s a physical tackler, who always is sound in his fundamentals.

He reminds me a lot of Vince Williams, especially early in his career. Worley will carve out a role for himself on special teams, and should be able to fill in at any linebacker position in a pinch. He’ll be stout against the run, but you’ll need to either hide him against the pass, or bring him off the field.

Either way, he’s worth taking a shot on late in the draft.