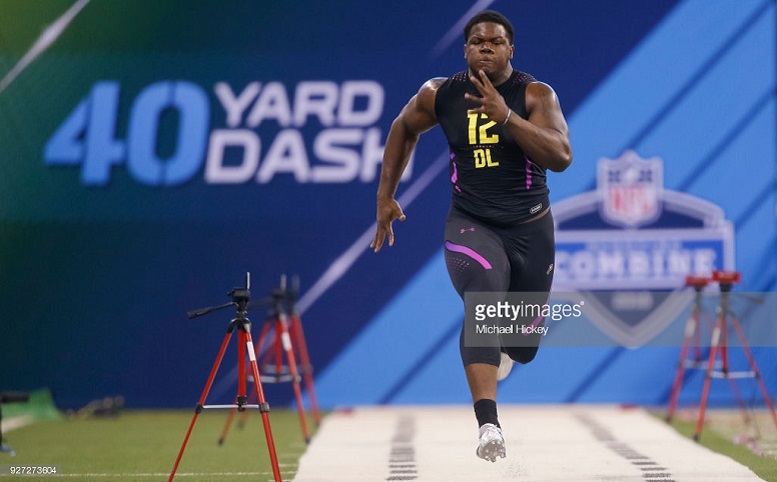 – Tends to come out of his stance high, leading him to be caught off balance
– Not very impactful as a pass rusher even though posting 5 sacks in each of last 2 years
– Doesn’t shed blockers well, sometimes dances too much
– Risk taker, baiting quarterbacks to run?

– Delaware high school All-State tight end and defensive end
– Raised by his grandparents and made the honor roll all four years of high school
– Was a team captain in both high school and college
– Started 21 out of 44 games, finished with 63 solo tackles (18 tackles for loss), 66 assisted tackles, 12 sacks, 11 pass defections, 3 forced fumbles, and 2 interceptions

He lined heads up on the center in a modified 3-4 front with him about a half yard off the line on a third and 5. At the snap, #92 comes up quite high and gets picked up by the guard and center. The Cavalier quarterback sees an opening to run when his pass options are covered up, and takes off. Nichols patiently fights off the double team and makes a wrap up tackle in space to bring down the signal caller. The defender kept fighting and did not give up on the play.

On a third and 8, Nichols once again comes up high off the snap. He punches the center back hard, then spins around to the offense’s left. This seems to force the quarterback to roll the other way, which #92 then reverses course and chases down the signal caller for a 5 yard gain, forcing Virginia Tech to punt. It is quite rare to see a man his size and position move so well.

On the first play of the game against Albany, #92 lines up helmet to helmet with the center. At the snap, he gets met by the center and right guard for a double team. Nichols fully extends his arms keeping both blockers off his body. The defender reads that the quarterback is going to throw and times his jump to knock down the pass. This was another case of the defender doing a nice job not allowing a double team to impact his play.

In the third quarter against Delaware State, Nichols kicks out to play in the B-Gap between the left guard and tackle. He, like always, comes off the snap high, and fully extends his arms. #92 is controlled by both offensive linemen. While this shows that the defender can line up outside of A-Gap, he is most effective where his height and leverage work against shorter blockers.

Bilal Nichols is very athletic for a man his size. Sure, he got high out of his stance almost every snap I watched and had a lot of issues disengaging from blockers, but this defender also wrecks some havoc out on the gridiron. #92 spun away from trouble, baited quarterbacks to run the other, and kept hustling until the whistle. If Nichols is available at the second Pittsburgh 5th round pick, the Steelers could do worse than select him. His hustle and athleticism jump off the screen to me.