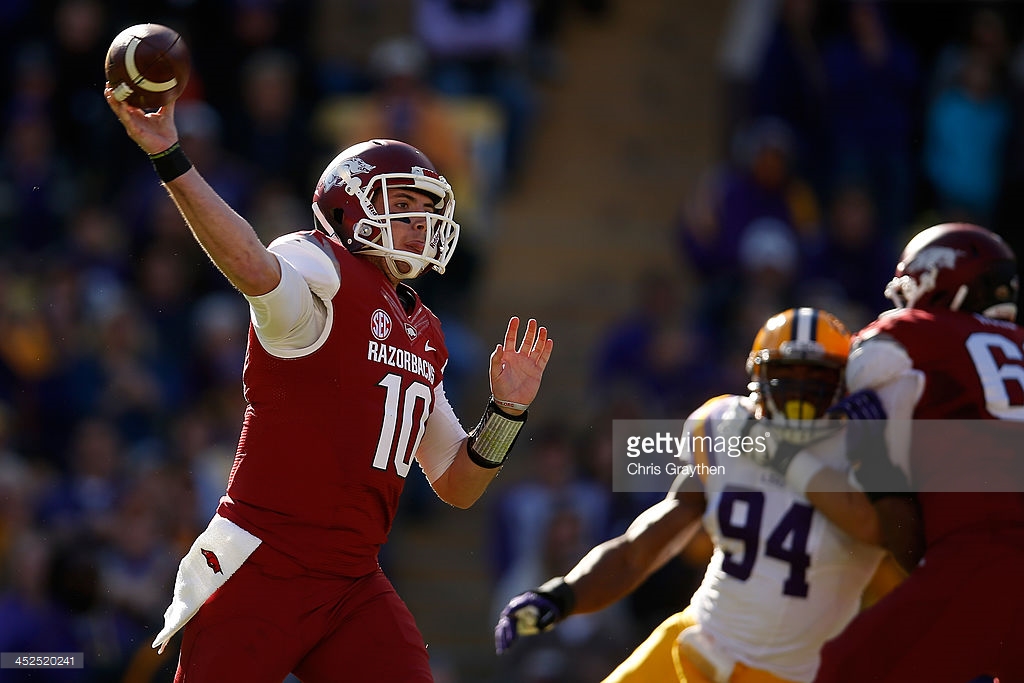 Breakdown of a QB the team has shown interest in. Arkansas’s Brandon Allen.

– Inconsistent accuracy, sprays placement
– Likes to try to muscle it in over the middle without stepping up
– Needs to learn to read coverages, go through progressions more
– Arm action is a little too long, some wasted movement to be refined
– Needs to get a little more depth on his drops
– Small hands, short physical side of spectrum
– Arm strength is limited with his poor mechanics
– Takes an extra second to mentally process having an open receiver and delivering the ball

For the flashes Allen shows, he can also be maddeningly inconsistent. His mechanics here are flawed, with no follow-through. As such, his accuracy turns the receiver around and runs him back a yard. He needs to lead the receiver with this ball and give him room to work with in space. Although he sets and throws quickly, necessary on this play, the placement can’t be this poor.

There is so much to love about Allen on a prospect from what he shows in a single play, and it’s this one. Third and long, money down, and they trust him enough to go 10 personnel and spread the field. The pocket quickly becomes muddy, and his jab steps in footwork carry him up enough to avoid the pressure off the edge. From there, he keeps his eyes downfield and works to open space. He takes a shot from the blitzer but delivers a beautiful strike downfield for a key conversion.

Or how about this one? Allen is reading the flat route to the right side out of the playaction, but he wants the deep shot. He takes too long to set his feet and hips before he has to completely put his entire body into this. Poor mechanics mean he has to compensate with pure strength before absorbing a big hit. Instead, he lays up a picture-perfect throw over the receiver’s shoulder in a bucket for the touchdown to TE Hunter Henry. Again he’s comfortable with getting hit to make a big play, and the touch needed to execute this throw across the field into good coverage is ridiculous.

With routes crashing the open side of the field, the Texas A&M defense comes with it. Arkansas actually uses an 8-man protection and only sends two receivers on routes. Allen sees the routes develop and realizes the hole opening to his left. He tucks it and runs, actually beating a LB to the edge on the way. Impressive scramble for a guy who usually keeps his head in the pocket and his eyes downfield.

Another third and long for Allen. This concept is taking the NFL and college by storm. In the NFL, it’s playaction-TE seam. Here, it’s fake the screen-upback go. Allen pumps the tunnel screen and re-sets to find the go route. However, he doesn’t have room to step up in the pocket. So he actually slides back and out of the pocket to give himself some space before letting the ball go dep. It’s well-placed but a little late and worryingly lays out the WR. Still, excellent job knowing where he wanted to go with the ball and maneuvering in the pocket to get it there.

This is not a good draft for NFL-ready QBs. Instead, it’s a good draft for talented college QBs with room to grow and develop as they mature into big-league passers. Brandon Allen is just another name on that list.

In a way it’s a shame he doesn’t meet some of the common quarterback sizing benchmarks, because otherwise I’d love to see what he could do with the right tutelage in an NFL system. His sub-nine inch hands (combined with his short end height) are going to take him off a lot of boards for the draft. That said, signal-callers with experience operating under center for much of their college career don’t come along every day.

Allen is used to moving the pocket and actually looks very comfortable throwing on the move. He has a lot of work to do on his mechanics, with footwork not getting him to the full depth as well as a release that incorporates some wasted movement to be eliminated. He also doesn’t look comfortable reading the field prior to the snap, and with a dominant offensive line and running back duo of Alex Collins and Jonathan Williams, he didn’t need to be the offense himself.

Allen has a lot to build on. Pocket presence like his can’t be taught – it’s simply refined through experience. Once he gets his mechanical problems under control, he could have a career as an NFL backup and spot starter. I don’t think he has the pure arm strength (although certainly the talent) or mental acumen to succeed and start long-term, but the upside is there.