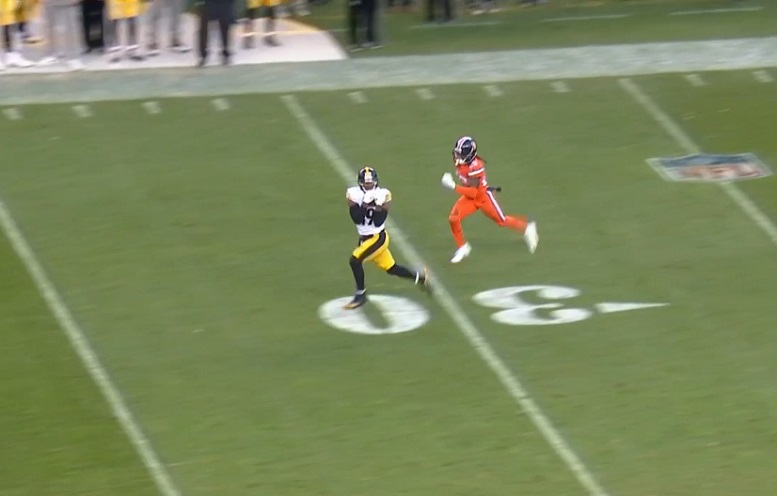 This series now continues with the Steelers longest offensive play of the 2018 regular season, which came in Week 12 of the season against the Denver Broncos and at Sports Authority Field at Mile High in Denver, CO on November 25. The play, a 97-yard pass completion from quarterback Ben Roethlisberger to wide receiver JuJu Smith-Schuster for a touchdown, came on a first-and-10 play with 10:47 left in the third quarter and with the Steelers tied with the Broncos 10-10.

On the play, Smith-Schuster, who was initially lined up outside on the right side of the offensive formation, got a great release off the line of scrimmage and was able to get inside Broncos cornerback Bradley Roby which immediately led to him being able to get on top of the defensive back and stack him. Despite him getting pressure right up the middle at the snap of the football, Roethlisberger was able to throw a deep pass down the right side numbers off his back foot as he was getting hit and it landed safely in the arms of a wide-open Smith-Schuster at the Steelers 32-yard-line. After making the catch, Smith-Schuster cut back toward the middle of the field, which resulted in Broncos safety Darian Stewart needing to spin around to change course. A block by fellow Steelers wide receiver Antonio Brown on Broncos cornerback Chris Harris at the Steelers 47-yard-line provide Smith-Schuster room to run down the left side of the field. One final tackle attempt by Stewart was warded off by Smith-Schuster via a stiff-arm and the wide receiver easily ran the remaining 20 yards for a touchdown.

Below is a video of the Roethlisberger 97-yard-touchdown pass to Smith-Schuster against the Broncos in addition to a short video that recaps the game.