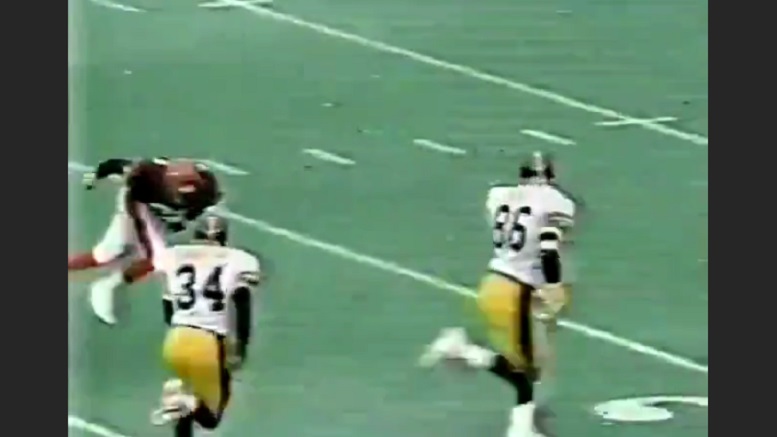 This series now continues with the Steelers longest offensive play of the 1993 regular season, which came in Week 10 of the season against the Cincinnati Bengals and at Riverfront Stadium in Cincinnati, OH on November 7. The play, a 71-yard pass completion from quarterback Neil O’Donnell to tight end Eric Green for a touchdown, came on a second-and-10 play with 2:49 left in the second quarter and with the Steelers trailing the Bengals 16-0.

On the play, Green, who was lined up attached to the offensive line on the right side, appeared to run an out and up with Bengals safety Darryl Williams attempting to cover him. O’Donnell hit Green with the pass in the middle of the field and at the Bengals 45-yard-line. Williams attempted to tackle Green at the Bengals 30-yard-line, but the Steelers big tight end seemingly discarded the defensive player with ease on his way to the end zone for the touchdown.

“We had a blown coverage, but it wasn’t Darryl,” said Bengals defensive coordinator Ron Lynn after the game, according to the Cincinnati Enquirer. “When you’re in a blitz and you’re in man coverage and you don’t get the sack, you’re in trouble back there.”

O’Donnell also talked about his touchdown pass to Green after the game.

“I read the blitz and just laid it up there for Eric,” O’Donnell said, according to the North Hills News Record. “Once Eric caught it, I saw 290 pounds running down the field. It was something we needed badly at that point.”

It was indeed something the Steelers needed badly at that point in the game as the then-winless Bengals had visiting Pittsburgh down 16-0 at the time of the long touchdown play. It was the start of 24 unanswered points scored by the Steelers on their way to beating the Bengals 24-16.

Green finished that game having caught three passes for 91 yards and the long touchdown. That long 71-yard touchdown reception against the Bengals was the longest of his NFL career as well.

As for O’Donnell, he finished that contest against the Bengals having completed 14 of his 34 total pass attempts for 244 yards with two touchdowns and an interception. That interception, by the way, was a 97-yard pick-6 by Williams in the second quarter.

Below is a video of O’Donnell’s touchdown pass to Green against the Bengals.