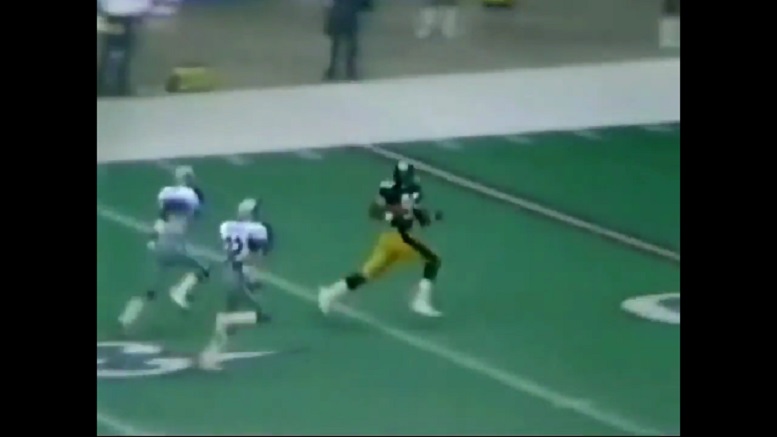 This series now continues with the Steelers longest offensive play of the 1985 regular season, which came in Week 6 of the season against the Dallas Cowboys and at Texas Stadium in Irving, TX on October 13. The play, a 69-yard pass completion from quarterback David Woodley to wide receiver Calvin Sweeney, came on a second-and-10 play in the fourth quarter and with the Steelers trailing the Cowboys 20-6.

On the play, Sweeney, who was lined up out wide to the left ahead of the snap of the football, was able to blow right past Cowboys cornerback Ron Fellows and Woodley hit him in stride at around the Dallas 27-yard-line. A shoestring tackle by Fellows, however, prevented Sweeney from scoring and it set the Steelers offense up at the Cowboys 2-yard-line. three plays later, Steelers running back Walter Abercrombie scored a one-yard-touchdown and the ensuing extra-point kick made 20-13 Dallas.

“We had the guy (Sweeney) doubled, with [Ron] Fellows and [Dennis]Thurman,” Cowboys safety Michael Downs said of the big pass play to Sweeney after the game, according to the Fort Worth Star-Telegram. “I think he just split us, a good play on their part.”

The Steelers offense, in total, registered just three explosive plays of 20 yards or longer against the Cowboys defense in what turned out to be a 27-13 road loss for the team. Sweeney finished the game with just two receptions for 78 yards while Woodley, who replaced starting quarterback Mark Malone in the game in the third quarter, finished 6-of-23 passing for 154 yards and three interceptions.

That 69-yard reception by Sweeney against the Cowboys turned out to be the longest one of his career.

Below is a video of Woodley’s pass to Sweeney against the Cowboys in addition to a full replay of the 1985 game.