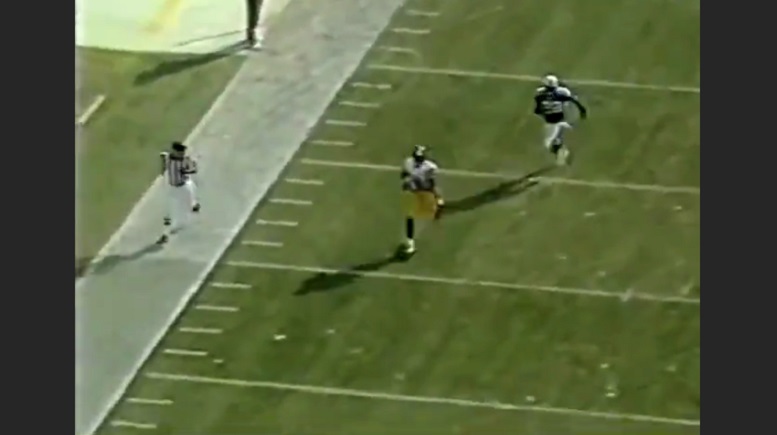 This series now continues with the Steelers longest offensive play of the 2002 regular season, which came in Week 14 of the season against the Tennessee Titans and at The Coliseum in Nashville, TN on November 17. The play, a 72-yard pass completion from quarterback Tommy Maddox to wide receiver Hines Ward for a touchdown, came on a first-and-10 play with 14:45 left in the first quarter and with the Steelers and Titans scoreless. It was the first offensive play of the game.

On the play, Ward, who was lined up outside to the right, ran an out-and-up route after the snap and was able to get Titans cornerback Andre Dyson to bite on the out portion. Ward then easily blew by Dyson and Maddox calmly delivered a deep pass to the wide-open wide receiver at the Titans 32-yard-line after a play-action fake to running back Amos Zereoue. The throw traveled 47 yards from Maddox’s release point at the Steelers 21-yard-line. Ward was ultimately taken to the ground by Dyson but only after he had crossed the goal line for a touchdown.

Ward had a fine showing against the Titans in what ultimately was a Steelers 31-23 road loss as he caught 10 passes in total for 168 yards and two touchdowns. As for Maddox, he had a game against the Titans he’d probably like to forget following that first offensive play as he went on to complete just 14 of his 28 total pass attempts for 194 yards with the lone touchdown to Ward and three interceptions.

Maddox was also knocked out of the game with a head/neck injury on the final play of the third quarter. That injury required him to be stretchered off the field my medical personnel and he was taken immediately to a local hospital.

Below is a video of Maddox’s touchdown pass to Ward against the Titans in addition to a short video that recaps the game.