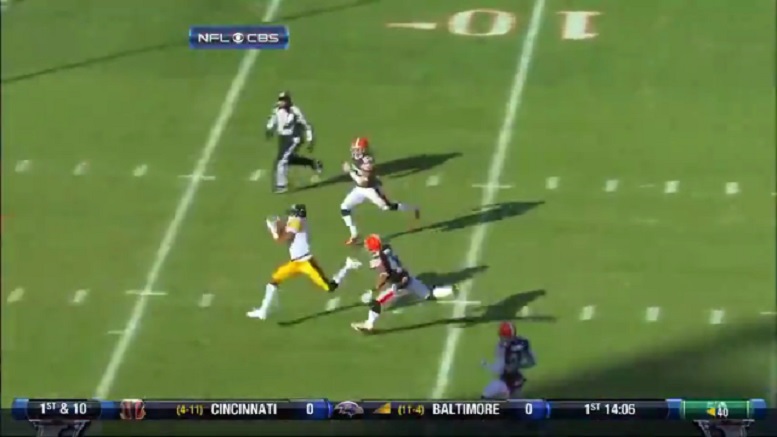 This series now continues with the Steelers longest offensive play of the 2010 regular season, which came in Week 17 of the season against the Cleveland Browns and at Cleveland Browns Stadium in Cleveland, OH on January 2, 2011. The play, a 56-yard pass completion from quarterback Ben Roethlisberger to wide receiver Mike Wallace for a touchdown, came on a first-and-10 play with 14:17 left in the first quarter and with the game scoreless.

On the play, Wallace, who started the play lined up outside of a bunch formation on the right side of the offense, ran a deep post route after first stemming to the outside and right at Browns cornerback Joe Haden. After a half-hearted play-action fake, Roethlisberger steppe up into the pocket and delivered a deep pass to Wallace in the middle of the field and at the Cleveland 7-yard-line. By then, Browns safety T.J. Ward, who had middle of the field coverage on the play, had no shot at tackling Wallace, who scored easily.

“With any type of field, that was going to be our first play of the game,” Wallace said after the game, according to the Cleveland Plain Dealer. “It was scripted. We know their guys are really frisky on the play action and like to bite down, and we got them.”

Wallace thought maybe the Browns blew a coverage on that play.

“I couldn’t tell you what they were in, to be honest,” Wallace said. “All I know is, I had room and I went and got it.”

Roethlisberger also talked about the quick-strike deep pass touchdown after the game.

“You see the single half safety, and he is back in perfect position,” Roethlisberger said. “Mike [Wallace] is so fast that I can just throw it out there and he can do the rest for me. You like to get on top and try to put a dagger in them early.

The Steelers went on to blow the Browns out 41-9 and Wallace ended the game with three receptions for 105 yards and the long touchdown. As for Roethlisberger, he threw for 280 yards and two touchdowns on 15 completions against the Browns.

Below is a video of Roethlisberger’s touchdown pass to Wallace against the Browns in addition to a short video that recaps the game.