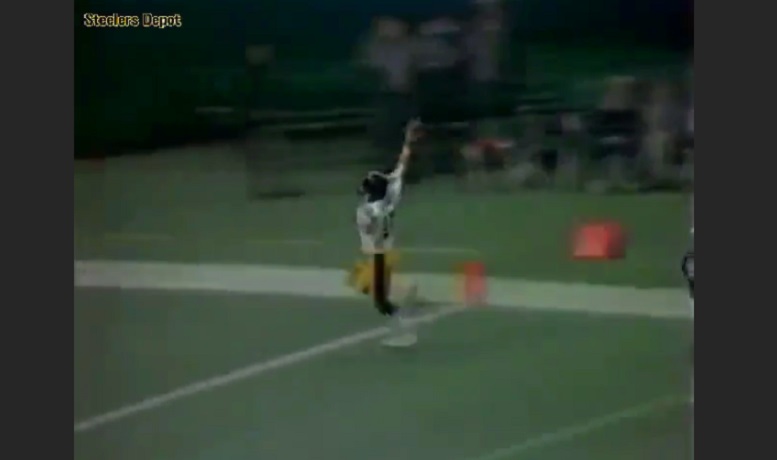 This series now continues with the Steelers longest offensive play of the 1981 regular season, which came in Week 10 against the Seattle Seahawks and at the Kingdome in Seattle on November 8. The play, a 90-yard pass completion for a touchdown from Steelers quarterback Terry Bradshaw to wide receiver Mark Malone, came on a second-and-10 play early in the second quarter and with the Steelers leading the Seahawks 7-3.

That 90-yard completion to Malone became the longest pass play in Steelers history at the time. Malone, who was selected in the first-round of the 1980 NFL Draft, needed to start and play wide receiver in that game against the Seahawks due to injuries to two of the team’s other wide receivers, Lynn Swann and Jim Smith. The other wide receiver that played in that game along with Malone and Stallworth, Calvin Sweeney, was recovering from a bruised lung. Even Malone wasn’t 100 percent healthy heading into that game because of a knee injury.

“We thought we could beat the corner outside, but it was supposed to be a 6-yard pass,” said Malone, according to the Pittsburgh Press. “Once I saw the ball, I said to myself, ‘Please, God, let me grab the ball.’ I thought if I caught it, I had one leg to make it the rest of the way.”

Strangely enough, the Seahawks player that reportedly blew the coverage on Malone on that 90-yard touchdown play, safety John Harris, was a teammate of Malone’s in college at Arizona State. He talked about the play after the game as well.

“I was supposed to have Malone covered in the deep zone,” Harris said after the game. “I was playing their tendency, thinking they would throw inside. We didn’t play him as tightly as we would a John Stallworth. The play will be something I will never forget.”

Malone did manage to catch another pass later in that game against the Seahawks, but it was unfortunately erased by a penalty. His 90-yard reception against the Seahawks would go on to be his only catch of his NFL career. The Bradshaw to Malone 90-yard touchdown completion stood as the Steelers franchise record touchdown reception play for 33 years but it was tied 20 years after it happened.

While Malone’s long touchdown reception from Bradshaw put the Steelers ahead 14-3, the Seahawks, who later in the second quarter fell behind 21-3, ultimately came back to win the game 24-21. The Steelers fell to 5-5 on the 1981 season with that loss.

Bradshaw, by the way finished that game having completed 13 of his 22 total pass attempts for 212 yards with the one touchdown to Malone and two interceptions. Stallworth caught three of those passes for 32 yards.

Malone, who was essentially the Steelers third-string quarterback for that game against the Seahawks, became the backup to Bradshaw several hours after the loss because fellow quarterback Cliff Stoudt broke the ulna of his throwing arm when he took out his frustrations on a barroom punching bag in Seattle after the team’s post-game flight back to Pittsburgh was fogged in.

Stoudt was out for the season due to that post-game incident in Seattle and after Bradshaw broke a bone in his throwing hand a month later, Malone became the quarterback for the rest of the season.

Below is a video of Bradshaw’s pass to Malone against the Seahawks.