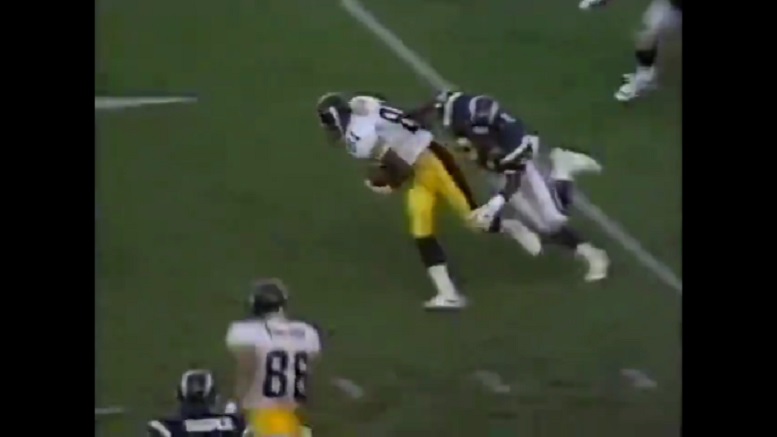 This series now continues with the Steelers longest offensive play of the 1994 regular season, which came in Week 17 of the season against the San Diego Chargers and at Jack Murphy Stadium in San Diego, CA on December 24. The play, an 84-yard pass completion from quarterback Mike Tomczak to wide receiver Charles Johnson for a touchdown, came on a second-and-11 play with 15:00 left in the fourth quarter and with the Steelers trailing the Chargers 24-19

On the play, Johnson, who was lined up outside and to the right, ran a slant route to the middle of the field and Tomczak connected with the rookie wide receiver at the Steelers 25-yard-line and right in front of Chargers cornerback Darren Gordon. After catching the pass from Tomczak, not only did Johnson break Gordon’s tackle attempt, he also avoided three more tackle attempts at the 35-yard-line before running the rest of the 65 yards to the end zone untouched for the touchdown.

Johnson had a big game in what ultimately was a 37-34 Steelers road loss to the Chargers as the rookie wide receiver caught four passes in that contest for 165 yards and two touchdowns. The long 84-yard touchdown reception against the Chargers would stand to be his longest play from scrimmage of his NFL career,

“Charles made some big plays today,” Steelers head coach Bill Cowher said after the game, according to the North Hills News Record. “He stepped up today like a lot of guys did.”

As for Tomczak, who platooned with starting quarterback Neil O’Donnell in what essentially was a meaningless regular season finale for the Steelers, he finished the contest having completed 10 of his 16 total pass attempts for 248 yards and two touchdowns,

Below is a video of Tomczak’s touchdown pass to Johnson against the Chargers.