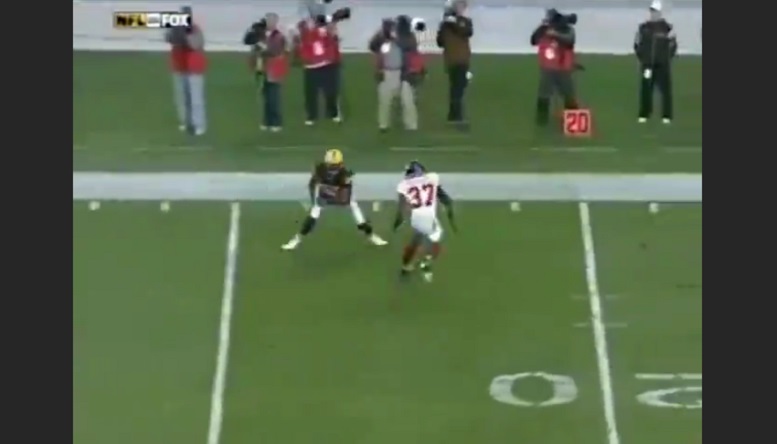 This series now continues with the Steelers longest offensive play of the 2008 regular season, which came in Week 8 of the season against the New York Giants and at Heinz Field in Pittsburgh on October 26. The play, a 65-yard pass completion from quarterback Ben Roethlisberger to wide receiver Nate Washington for a touchdown, came on a first-and-10 play with 10:10 left in the third quarter and with the Steelers trailing the Giants 9-7.

On the play, Washington, who started the play liked up on the left side of the offensive formation, started off running a vertical route before breaking it off like corner route 15 yards down the field. Giants safety James Butler thought Washington was going to break his route inside to the post and got spun around in coverage. Roethlisberger, after first delivering a play-action fake, delivered a deep pass to a waiting Washington at the Giants 25-yard-line. Butler once again got turned around after the catch and that allowed Washington to waltz easily into the end zone down the left sideline.

Butler talked about giving up the big play for a touchdown after the game.

“He [Washington] was pushing at me, so I thought he was going to do a post route,” Butler said, according to The Star-Ledger. “By the time I tried to turn, the ball was already gone. And he’s a fast dude, so I tried to make the tackle. But … I didn’t.”

That touchdown would be the last points the Steelers would score against the Giants in that game and they went on to lose that contest 21-14. That big pass reception for 65 yards and a touchdown was Washington’s only catch of the game. Roethlisberger didn’t have a great showing in that loss, either, as he finished 13-of-29 passing for 189 yards with the one touchdown pass to Washington and four interceptions.

Below is a video of Roethlisberger’s touchdown pass to Washington against the Giants in addition to a full video replay of the game.