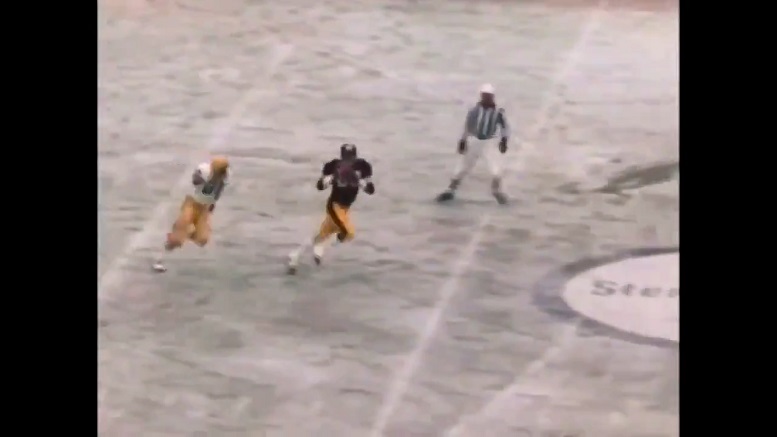 This series now begins with the Steelers longest offensive play of the 1970 season which came against the Green Bay Packers at Three Rivers Stadium in Pittsburgh on December 6th, 1970. It was an 87-yard touchdown pass from Steelers quarterback Terry Bradshaw to wide receiver Dave Smith, who unfortunately just recently passed away at the age of 73.

The touchdown pass from Bradshaw to Smith reportedly happened at the 10:27 mark of the third quarter and on a 3rd and 13 play from the Steelers 13-yard-line. The scoring toss also put the Steelers ahead 9-6 in the game as the extra-point was ultimately missed. At the time, it was the second-longest Steelers offensive play in the history of the franchise. It also stood the test of time throughout the 70s as it was the longest Steelers offensive play of the decade.

The game, just the seventh one ever played at Three Rivers Stadium, included extremely cold and windy conditions as it was reportedly 23 degrees with winds of 22 mph, and a wind chill that made it 7 degrees.

While Steelers quarterback Terry Hanratty started that gamer against the Packers and played the first half, Bradshaw, who was a rookie in 1970, played the entire second half. Bradshaw only managed to complete three of his 20 total pass attempts in that game for 110 yards with one touchdown to Smith and four interceptions. Smith finished the game with three receptions for 111 yards and a touchdown.

Smith, who like Bradshaw was a rookie in 1970 after being drafted that year by the Steelers in the 8th round and 184th overall, beat Packers cornerback Bob Jeter, a two-time Pro Bowler, for the touchdown. Jeter talked about that play after the game

“That was the first touchdown pass thrown over me all year,” Jeter said, according to the Green Bay Press Gazette. “It was a third-and-13 situation and we had a blitz on … I had no help on that play at all – I was on him all alone.”

That touchdown pass to Smith was just the sixth of Bradshaw’s young career and it was his final scoring toss of his rookie season. It was also just Smith’s second career touchdown reception.

While the long touchdown pass from Bradshaw to Smith did put the Steelers ahead at the time, the Packers roared right back for a go-ahead touchdown on their ensuing offensive possession and they ultimately won the game 20-12.