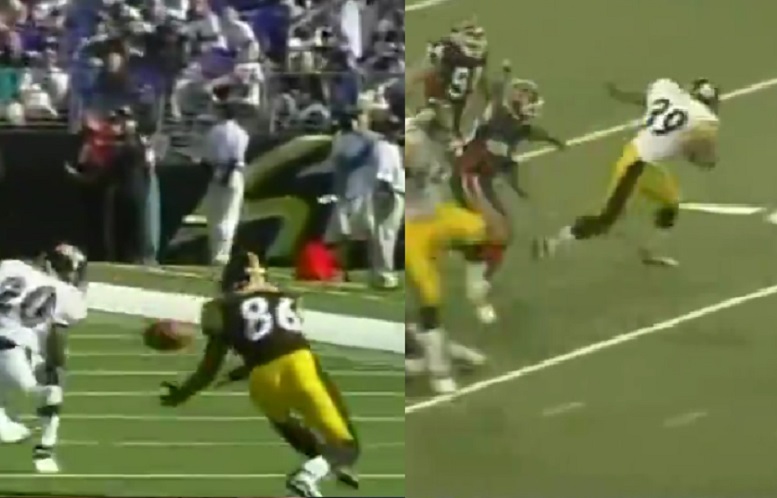 This series now continues with the Steelers longest offensive play of the 2004 regular season and this time there were two matching ones of 58 yards. The first one came in Week 3 of the season against the Baltimore Ravens and at M&T Bank Stadium in Baltimore, MD on September 19 and the second one came in Week 17 against the Buffalo Bills and at Ralph Wilson Stadium and on January 2, 2005.

The first of the two plays, a 58-yard pass competition from quarterback Ben Roethlisberger to wide receiver Hines Ward, came on a third-and-12 play with 14:29 left in the fourth quarter and with the Steelers trailing the Ravens 20-0. On that play, Roethlisberger escaped the pocket to his left and attempted to a pass in the direction of Ward. Ravens safety Ed Reed steeped in front of the intended pass and should have intercepted it. However, it managed to glance off his hands and bounced up in the air further down the field to Ward, who caught the football at around the Ravens 42-yard-line. Ward then ran down the left side of the field and was ultimately tackled by Ravens safety Will Demps at the Baltimore 3-yard-line.

Two plays after the long completion to Ward, Roethlisberger threw his first career touchdown pass to wide receiver Antwaan Randle El from the 3-yard-line. The Steelers ultimately lost that road game to the Ravens 30-13 and Roethlisberger ended the contest 12-of-20 passing for 176 yards with two touchdowns and two interceptions after taking over for injured starting quarterback Tommy Maddox in the third quarter. As for Ward, he ended that game against the Ravens having caught six passes for 151 yards and a touchdown.

The second of two 58-yard plays for the Steelers offense during the 2004 season, a run down the left side of the field by running back Willie Parker, came on a first-and-10 play with 1:49 left in the third quarter and with the Steelers trailing the Bills 17-16. On the play, Parker took the hand-off from quarterback Brian St. Pierre and exploded through a nice hole right of right guard Keydrick Vincent. He then avoided a tackle attempt by Bills safety Lawyer Milloy at the Steelers 26-yard-line and then headed down the left sideline. Parker was ultimately tackled by Bills cornerback Nate Clements at the Buffalo 22-yard-line.

The Steelers went on to beat the Bills 29-24 in what was a meaningless game for them to close out the 2004 regular season. Parker ended the game with 102 yards on 19 total carries.

Below are videos of Roethlisberger’s pass to Ward against the Ravens and Parker’s run against the Bills.