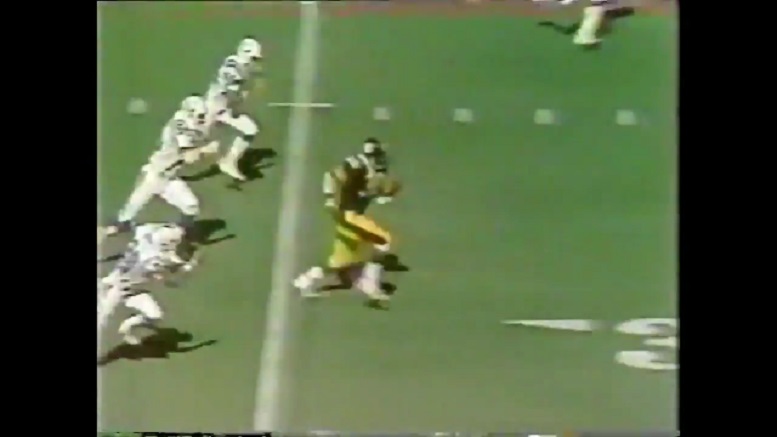 This series now continues with the Steelers longest offensive play of the 1979 regular season, which came in Week 4 against the Baltimore Colts and at Three Rivers Stadium in Pittsburgh on September 23. The play, a 75-yard run to the right side by running back Sydney Thornton, came late in the third quarter and on a second-and-6 from the Steelers 14-yard-line. The Steelers were trailing the Colts at the time, 13-10.

The running play, Ride 38, included a great block out in space and on the edge by Steelers center Mike Webster. After exploding through the open lane created by Webster, Thornton turned on the jets and it looked like he would score an 86-yard touchdown. However, Colts rookie cornerback Larry Braziel had other ideas as he finally caught up with Thornton from behind and got the running back down on the ground at the Colts 11-yard-line.

“I just ran out of gas,” said Thornton after the game, according to the Pittsburgh Press. “I tried to run like a scatback, but I should’ve been a thinker and changed direction near the end. I didn’t look back, though, I just looked ahead at the goal-line marker.”

The Steelers failed to score after that big run by Thornton, however as fellow running back Rocky Bleier fumbled away the football to the Colts defense on the very next play.

Thornton, who had suffered a rib injury in the first quarter of that game against the Colts, finished the contest with a career high 129 yards rushing on 13 carries. The Steelers second-round selection in the 1977 NFL Draft out of Northwestern State University also caught three passes for another 33 yards against the Colts. That performance wound up being the signature game of Thornton’s NFL career.

The Steelers went on to win that game against the Colts 17-13 thanks to a fourth quarter touchdown pass from quarterback Terry Bradshaw to tight end Bennie Cunningham from 28 yards out.

Below is a video of Thornton’s run against the Colts in addition to a long video that includes several plays from the Steelers 1979 home win over Baltimore.