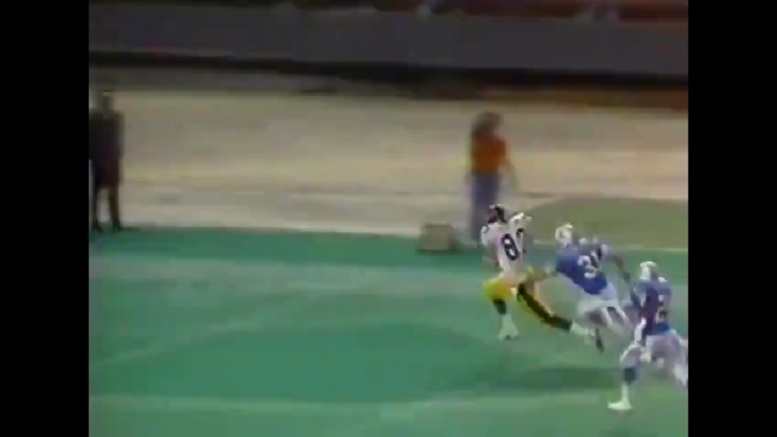 This series now continues with the Steelers longest offensive play of the 1987 regular season, which came in Week 15 of the season against the Houston Oilers and at Astrodome in Houston, TX on December 20. The play, a 63-yard pass completion from quarterback Mark Malone to wide receiver Weegie Thompson, came on a first-and-10 play with 5:11 left in the fourth quarter and with the Steelers trailing the Oilers 24-16.

On the play, Thompson, who was lined up wide on the right side pre snap, got himself wide open down the field due to what looked to be a blown coverage by the Oilers defense. Malone seemed to be a bit late getting rid of the football and his deep throw, which was caught by Thompson at around the Oilers 34-yard-line, needed to be waited on by the Steelers wide receiver.

The underthrown pass from Malone allowed Oilers safety Jeff Donaldson time to catch up to the wide-open Thompson and ultimately tackle the wide receiver at the Oilers 14-yard-line. Two plays later, Malone unfortunately threw an interception and the Steelers offense came away empty-handed on what was pretty much a must-score drive.

The Steelers ultimately lost to the Oilers 24-16 and Thompson only had that one reception for 63 yards in the contest. As for Malone, he finished the game having completed 12 of his 27 total pass attempts for 181 yards with no touchdowns and three interceptions.

That long pass play turned out to be the career longs for both Malone and Thompson.

Below is a video of Malone’s pass to Thompson against the Oilers.